Why Hillary Clinton Should Advertise on Snapchat

There’s great news for the Left out of Venice Beach this month: Snapchat is launching a political advertisement branch. For all you dinosaurs still living actual lives in the real world, Snapchat is a smartphone photo-messaging app. Its gimmick is that the photos you send (hypothetically) disappear into the Great Online Void once they’ve been viewed. Like most strokes of internet genius, Snapchat was designed with the height of sleaze in mind. It was meant for those days when you’re itching to sext your girlfriend a picture of yourself in the edible underwear she bought you at Kmart: after you’re done, Snapchat deletes the photo and destroys the evidence. It’s greasy, superficial, and designed expressly for the evasion of accountability. Which means it’s the perfect medium for a Hillary Clinton ad campaign!

Of course, it was the Obama campaigns that really pioneered the use of social media in the political arena. And why not? The Twittersphere is the ideal place for the Obama message. 140 characters is about as far as this president can get without putting his foot in his mouth. Misleading infographics and self-righteous soundbites — the bread and butter of the Obama image — are right at home on Facebook. And Instagram is a great venue for reaching out to one of Obama’s key voter demographics: environmental studies majors in the beginning of their sophomore year. 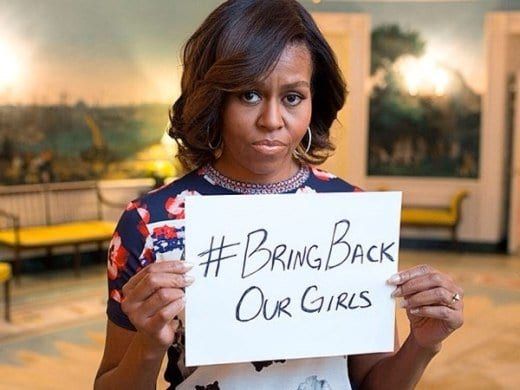 Social media, like the Obama administration, is big on heartfelt platitudes and painfully short on real-world follow-up. Witness, for example, the #BringBackOurGirls campaign, ostensibly intended to combat the radical terrorist group Boko Haram. In this heroic feat of PR propaganda, Michelle Obama pouted dolefully out of a million computer screens while the Middle East and Africa were ruthlessly brutalized by Islamofascists on her husband’s incompetent watch. But Obama has made sure to take decisive action against Islamic terrorism since then by inviting a YouTube star to the White House. And playing a particularly superb round of golf. While Boko Haram continues to ravage the Nigerian countryside. That’s just how much Obama #cares.

So Snapchat seems like the perfect way for Hillary to carry on the Left’s legacy of empty rhetoric into 2016. Snapchat is vapid and trendy, it necessitates the most abbreviated and meaningless verbal communication possible, and it ensures that all promises are literally erased from existence mere seconds after they’re made. With this in mind, allow me to suggest a few potential Clinton 2016 Snapchat ad campaigns. 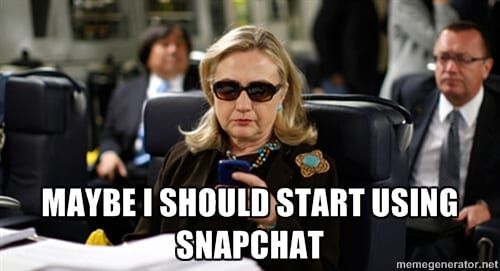 What if, for example, Hillary sent prospective voters a snapchat depicting the text of 32,000 “private” emails, all of which were suddenly whisked away and deleted forever before their very eyes? Snapchat is just the right place to send information when you want to make it disappear completely. This campaign would be ideal for giving voters a sense of the stalwart transparency they can expect from a Clinton presidency. After all, Hillary has already said she would be more than happy for the public to see her emails — unless they might potentially be related to Benghazi, in which case it would be more “convenient” if they vanished into thin air and were never seen again. You’re in luck, Hillary: that’s where Snapchat comes in!

Or how about an ad campaign in which Hillary delivers an alluring snapshot of her policy on women’s rights directly to your phone? In this campaign, our tireless hero would champion the cause of equal pay for equal work. Hillary’s statistics on wage inequality would flash across the screen just long enough to get you all hot and bothered. But then they would be yanked into the ether before you could notice that they’re entirely bogus and have been repeatedly debunked. This campaign would be executed tastefully and would not in any way exploit Hillary’s gender in order to gain votes. That sort of identity politics is far beneath the unassailable integrity of the modern American Left. 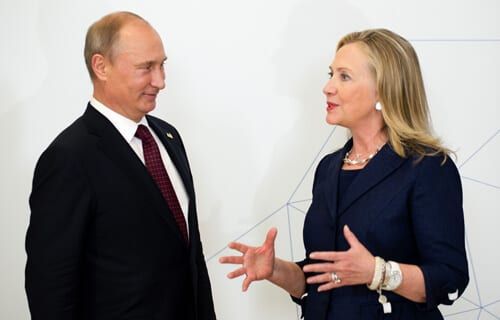 Perhaps best of all would be an exclusive Snapchat campaign addressed only to Vladimir Putin’s username, [email protected] This campaign would feature sultry backlit glamor shots of weapons-grade uranium stockpiled by the ton in a top-secret facility at the bottom of the Baltic Sea. The caption would read, “there’s more where that came from . . . #ReadyForHillary.” Once the image vanished without a trace, a completely unrelated $3,000,000 donation would materialize unexpectedly in the accounts of the Clinton campaign fund.

Really, when it comes to Hillary 2016 and Snapchat campaigns, the possibilities are effectively limitless. It’s a match made in digital heaven. In fact, just to ensure maximum effectiveness, I would recommend posting your own ideas for Clinton snapchats in the comments section. Remember, don’t get bogged down with any nonsense about honesty or accuracy — reality has no place on social media. Besides, political virtue and ideological integrity belong on Myspace. And we all know Myspace is so early 2000s.

Spencer Klavan is a gentleman and a scholar. Or just a scholar, depending on who you ask. He studied Greek, Latin, and Theater at Yale, so when someone tapped him on the shoulder and whispered, "ahem, Mr. Klavan, were you planning on, you know, holding a paying job?" he broke out in a cold sweat and promptly applied for graduate school. A sucker for action movies, classic video games, and Ancient Greek hexameter, Spencer has big dreams about putting the gore, sex, and rock 'n roll back into ancient literature. He does this mostly in list form on PJM and at his blog, The Forum (check it out!). You can hit him up on Facebook and Twitter, and if you really want to get an earful, ask him about cross country running or the best recipes for hummus. Spencer will be pursuing a master's in Greek and Latin Literature at Oxford this fall.
Read more by Spencer Klavan