The End of the UK as We Know It? Scots Edge Towards Independence 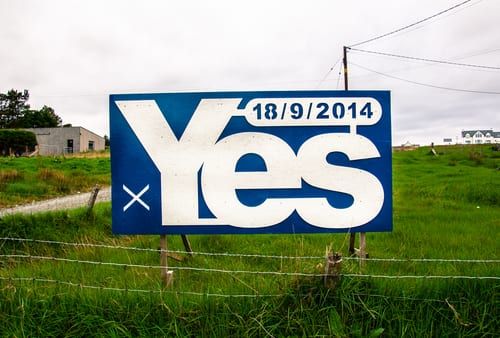 Billboard with “Yes” written on it in Stornoway, Scotland. Refers to the referendum that will take place on September 18th, on whether Scotland should be an independent country. (Photo by DrimaFilm, Shutterstock.com.)

One week from now, it’s entirely possible that the United Kingdom will, in effect, no longer exist in its current form. Next Thursday the people of Scotland will vote Yes or No on the question, “Should Scotland be an independent country?” — and according to recent polls, an increasing number of Scots are ready to end the 307-year union between their country and the rest of Britain. If the decision is indeed Yes, then the details will take a year or so to thrash out, but a political earthquake will be triggered that will shake Britain to its foundations, with the shockwaves felt across Europe and much of the world.

Calls for a vote on independence have been growing since a Scottish Parliament, with powers devolved from Westminster, was created in 1998. For much of the time since the independence referendum was announced at the end of last year, the No campaign had held a comfortable majority in the region of 60 percent to 40 percent; however, the polls have narrowed in recent weeks, and last week the Yes campaign took the lead in a poll for the first time.

The Yes campaign’s message is that it’s time for Scotland to strike out on its own, and that the country can achieve more as an independent nation than as part of the UK. Its leaders envision the country as a Scandinavian-style land of plenty along the lines of Norway and Sweden, economically prosperous but with a generous welfare state funded by income from North Sea oil and gas — 90 percent of the UK’s oil reserves lie in what would likely become Scottish waters in the event of a Yes vote.

The Yes campaign began its surge after the second of two televised debates between Scottish National Party leader and campaign figurehead Alex Salmond, and Alistair Darling, a Scot who served as chancellor of the exchequer under Gordon Brown in the last Labour government, and who fronts the No campaign. Salmond easily defeated Darling in that debate, having been widely thought to have lost to Darling in their first encounter.

All three of Britain’s major political parties — David Cameron’s Conservatives, their junior coalition partners the Liberal Democrats and the left-of-center Labour Party — oppose Scottish independence, and are promising Scots greater autonomy from Westminster and more financial powers for their Parliament if they vote to preserve the union, a proposal known as maximum devolution or “devo max.”

The No campaign, whose slogan is “Better Together,” has produced some unlikely bedfellows, with Cameron and Labour leader Ed Miliband campaigning with one voice, if not quite side by side. Both leaders traveled north this week to make last-ditch appeals to voters, and the appearance of Cameron in particular was seen by some as a sign of desperation; the Conservatives have become almost extinct as a political force in Scotland, and have kept a relatively low profile in the referendum campaigning. Instead the battle to save the union has been spearheaded by senior figures from Labour, which still has a strong presence north of the border.

While many in the Labour Party certainly have a genuine attachment to the union, the party also knows that a vote for Scottish independence would make it much harder for the party to return to power in what remains of the UK. If you take Scotland’s 59 members out of the Westminster Parliament that governs Britain, David Cameron would have won a narrow majority in the 2010 general election, rather than being forced into a coalition.

From the start, Scottish National Party leader Alex Salmond has been able to run the more engaging campaign — it’s easier to run on the promise of radical change and a new beginning than to defend the status quo, and Salmond has been promising all things to all people, from business-friendly policies to more generous welfare handouts for deprived areas of Glasgow and other cities. It’s Hope and Change in a kilt, and Salmond has duly adopted elements of Barack Obama’s successful campaigns, building a coalition of young people, women and welfare dependents. The flattery of imitation appears to have left Obama unmoved however — the president delighted the No campaign and infuriated Yes supporters when he expressed his support for Scotland staying in the UK, despite the fact that the United States takes no official position on the matter.

While Yes supporters have accused their opponents of using fear tactics, in particular with regards to the economic prospects for an independent Scotland, the Yes campaign has been trying to attract Scottish Labour supporters with some scaremongering of its own, issuing dire predictions about “permanent Conservative rule” over Scotland and the effects of Tory austerity policies on healthcare and education, even though the existing Scottish parliament has considerable powers of its own in both areas.

And the No campaign’s warnings that a vote for independence would be disastrous for Scotland’s economy aren’t without merit. As the polls have tightened in recent days, billions of pounds have been wiped off the value of Scottish-based companies, and several large firms have warned that they may have to move south of the border. Meanwhile energy analysts say Salmond’s much-vaunted oil reserves aren’t all he’s made them out to be — and while there’s no danger of the whiskey running out, without energy and banking its hard to see how the economy of an independent Scotland would be sustained, and how all Salmond’s “free stuff” would be paid for.

Other issues that would be raised by a Yes vote range from what a new British flag would look like to the future of Britain’s nuclear deterrent, a fleet of submarines carrying Trident nuclear warheads which is currently based in Scotland. Salmond, appealing to his center-left base and green activists, has pledged to remove the subs; however, that could put Scotland in breach of its obligations to NATO, of which Salmond wants to remain a member. Salmond says he’ll reach a deal for Scotland to remain in NATO, and it’s a line he’s relied on time and again when specific post-independence issues are raised: “Trust me on this one; just vote for independence and we’ll sort out the details later.”

The political fallout from a Yes vote for what remains of the UK would be far-reaching. The 2015 general election might be postponed, or a second election held post-independence, after boundaries have been redrawn and constitutional changes enacted. It would be difficult for Cameron to continue as prime minister and Tory leader having become “the leader who lost Scotland,” and a new and probably more right-wing leader would likely press ahead with moves to take Britain out of the European Union. And with Labour weakened in what remains of the UK, the party would have to change its message to appeal more to English voters, which could see it campaigning on similar anti-immigration and anti-Europe turf to Nigel Farage’s UK Independence Party, with its more  “progressive” supporters defecting to the Lib Dems.

There are many more practical matters that would need to be resolved — and that’s before we get to the unforeseen consequences. And there’s also the small matter of how Scots will get along with one another after the referendum: whichever way it goes, it’s likely that close to half the population will be forced either to remain in a United Kingdom of which they no longer want to be part, or to become citizens of a separate nation against their will.

Should U.S. conservatives care about the choice Scotland makes? While they don’t have a dog in the fight, it would be understandable for citizens of a country that itself broke away from Britain to have some sympathy with the Scots. However, America’s struggle for independence isn’t a good analogy, given the ancient ties and long history of unity and cooperation between Scotland and the rest of the UK — Scottish independence would be more akin to Texas leaving the United States than, for example, the Baltic states reclaiming their independence from the Soviet Union.

With just a week to go, the odds still seem to slightly favor a No vote. Most polls that count undecided voters put their number at between 10 and 20 percent, and if, as tends to happen at election time, a majority of these break in favor of the status quo it might be enough to save the union. And when the furious campaigning and arguments over economic statistics are put to one side and Scots enter the polling booths, it may be that sentiment and respect for tradition win out over the enticing but uncertain prospects of going it alone; after all, a vote for independence would be all but irreversible, while if the result is No the pro-independence voters will live to fight another day, and may at any rate feel they’ve got much of what they want in the form of more devolved powers.

If the Scots say No then an uneasy calm will return to British politics for the time being, but the political establishment will have suffered an almighty jolt. If Scotland says Yes to independence, and goodbye to the UK, then we’ll embark on a period of a political and social upheaval that will last for decades, and the likes of which the British Isles haven’t seen for centuries.