It’s at least three months since the British tabloid newspapers ran a good piggy story. I think we’re about due for another one. Pigs rear their ugly but allegedly intelligent heads every now and again in our tabloids and in counter-jihad blogs such as Gates of Vienna and Dhimmi Watch. The pattern is as follows:

Those who write off the UK as lost to dhimmitude often cite such stories from our tabloids: piggy bank bans, alleged scrapping of Christmas lights, and bans on England football shirts in pubs. When not untrue, these tales are greatly exaggerated. Besides, the shrieking of our tabloids might be construed as healthy — as a protest on the part of ordinary Britons against the political elite who tell us we should all be “embracing diversity.” The more sedate American press could learn something.

Not that we should be complacent — far from it. There is serious dhimmitude in the UK, but it is not to be found in a Piglet pencil prohibition. Dhimmitude lies rather in the failure of our leaders to recognize and communicate the unique danger of Islam.

Last year’s kerfuffle over veils is symptomatic of that failure. Our former Home Secretary Jack Straw earned praise in the tabloids for speaking out against the niqab, and his comments were correct as far as they went. But they were superficial — as thin as the niqab itself. He did not say, because he did not know, that the veil is a symbol of opposition; that Islam will always be in opposition; that jihad is a command for all time, even if its tactics vary. 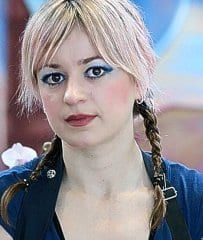 Ms. Desrosiers runs an “alternative” London hair salon, specializing in “funky urban cuts”. She is being sued for “religious discrimination” after refusing to give a job to a Muslim woman who wanted to wear a headscarf to work. A distinctly un-funky Bushra Noah (pictured below) is claiming £35,000 ($70,000) for “injured feelings” and an unspecified sum for lost earnings. 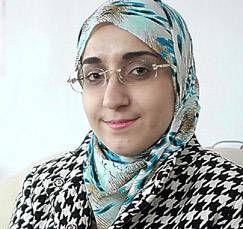 From the London Evening Standard:

Ms. Desrosiers, 32, who set up her business in King’s Cross 18 months ago, has already spent more than £1,000 fighting the case and says that if she loses she will be forced to close. She denies any discrimination and says she rejected Ms. Noah because she was unwilling to show her hair at work.

“I sell image — it’s very important — and I would expect a hair stylist to display her hair because I need people to be drawn in off the street,” said Ms. Desrosiers. “If someone came in wearing a baseball hat or a cowboy hat I’d tell them to take it off while they’re working. To me, it’s absolutely basic that people should be able to see the stylist’s hair.”

Hairdressing is seen as a trivial job. But this is by no means a trivial case. Ms. Desrosiers is an entrepreneur, a hard worker, and a risk-taker. Despite punitive taxes and sky-high London rents, she has so far made a success of her business. Yet she could lose everything and go personally bankrupt. Ms. Noah, in contrast, risks nothing. Unemployed like so many Muslims in the UK, she will receive legal aid from non-Muslim taxpayers, including Desrosiers, to fund what is essentially a form of jihad. For many British Muslims jihad, as I argue here, takes the form of entitlements greedily seized from, and all too easily given by, non-Muslims in the form of welfare payments and special treatment.

I do not believe that this case will succeed. But even if it fails, the expense and stress of fighting this and other cases (the jilbabed Luton schoolgirl, the niqab-wearing grammar school pupil), gradually wears down our resistance. As Ezra Levant, brave defender of free speech, put it: “Even if we win, we lose — the process has become the punishment.”

The Desrosiers case is about much more than hair. This is a jihad of attrition. Our newspapers need to get their priorities right. There is dhimmitude in the UK, but Christmas lights, football shirts, and piggy banks are the least of it.

Mary Jackson is a British editor for the New English Review, an Anglo-American online magazine of politics and culture, dedicated to celebrating the good in Western civilization and warning against that which would threaten it. Click here for the latest full-length articles, and here for the Iconoclast, the regularly updated Community Blog.