Four Lessons from the 2014 Election 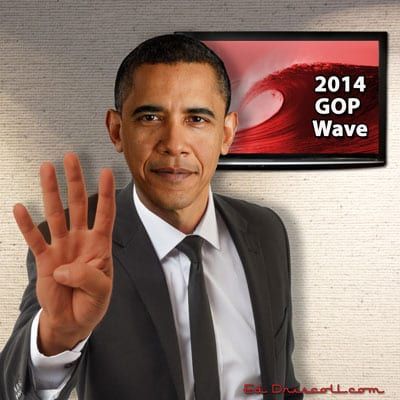 Many pundits and campaign consultants are no doubt analyzing the election results across the country to try to decipher what lessons the Republican wave holds for candidates planning to run in 2016. But there are four easily seen lessons that both of the major political parties should take to heart:

First, the manipulation of election rules and political trickery didn’t work. In Kansas, for example, the Democratic Party forced its U.S. Senate nominee to withdraw and refused to comply with a state law that required the party to name a replacement candidate for the ballot. Democrats were hoping that their voters would consolidate behind faux-independent candidate Greg Orman, a contributor to Barack Obama and the DSCC who, according to Vice President Joe Biden, would have caucused with Democrats if he had won. That political trickery failed — Republican incumbent Pat Roberts cruised to an easy victory with 53% of the vote to Orman’s 42%.

In Illinois, the Democratic legislature put into effect a new law that implemented same-day registration and extended the early voting period (with no ID requirement for early voting) but only for this election in an effort to reelect the incumbent Democratic governor, Pat Quinn. Yet Quinn was beaten by Bruce Rauner (R) in a 51% to 46% race. In Colorado, Democrats implemented new, fraud-prone rules that mailed ballots to every registered voter, even voters listed as “inactive” because they have moved or may otherwise have become ineligible to vote. Cory Gardner (R) still beat Sen. Mark Udall (D) by five points.

Second, race baiting and attempts to terrify black voters didn’t work. In North Carolina, an anonymous flyer was distributed in Fayetteville with a picture of a lynching from the 1920s and a message telling voters that if incumbent Democratic Sen. Kay Hagan didn’t win, Obama’s impeachment would begin. The head of the local chapter of the NAACP, Jimmy Buxton, saw nothing wrong with the flyer and didn’t think it was racist. Yet Thom Tillis (R) still beat Hagan.

In Georgia, the state Democratic Party sent out flyers showing black children holding signs saying “Don’t shoot” and “If you want to prevent another Ferguson…vote.” Michael Smith, the communications director for the Georgia Democratic Party, was completely unapologetic for invoking scenes of racist violence. But the flyer didn’t prevent David Perdue from winning the open U.S. Senate seat without a runoff or Gov. Nathan Deal from being reelected, rolling over a challenge from Jason Carter, grandson of President Jimmy Carter.

Third, the “war on women” theme didn’t work. Just look at the results in the governor’s race in Texas, Sen. Mitch McConnell’s easy reelection in Kentucky, and Sen. Mark Udall’s stunning loss in Colorado. Udall was ridiculed as “Mark Uterus” because of his almost exclusive focus on contraception and abortion during his campaign, to the point where he was even heckled by a large Democratic donor during the final hours of the campaign for seeming to make that “the only thing” Udall stood for.

Fourth and finally, a dismissive attitude towards voters and particularly black voters didn’t work. Last week on TV One, “Where Black Life Unfolds” according to its motto, Michelle Obama told interviewer Roland Martin that black voters should not pay any attention to who the candidates are, what their records are, their positions on issues, or whether they have the character and principles needed. No, she told the audience that “It’s not about the person on the ballot…a Democratic ticket is the clear ticket that we should be voting on, regardless of who said what or did this. That shouldn’t even come into the equation.”

That parallels the insulting position the Holder Justice Department and the NAACP have taken in their lawsuit against North Carolina’s voter ID law and early voting changes. Their experts claim that black voters are “less sophisticated” than white voters and that they are not as capable of “understanding who the candidates are [or] becoming informed” about the issues.

Voters in Maryland obviously didn’t listen to Michelle Obama’s advice or think they are less capable of becoming informed about the candidates. In a state where Democrats have a two-to-one advantage, voters elected Larry Hogan (R) governor. He defeated Lt. Gov. Anthony Brown, who was responsible for Maryland’s disastrous launch of its Obamacare website and who, unlike other Democrats, actually asked Pres. Obama to come to Maryland and campaign for him. Hogan’s victory margin was an astonishing 54% to 45%, quite a condemnation of what Brown and Obama “said” and “did” in their high tax, pro-regulation, expansive government policies.

While it was Democrats who failed in this election with such tactics, these lessons apply equally to both political parties. Those who want to use political trickery and race or gender baiting to win elections, or who have a contemptuous attitude towards the American people, are going to lose elections. And that is a good thing.

Hans A. von Spakovsky is a Senior Legal Fellow at The Heritage Foundation. Along with John Fund, he is the coauthor of “Who’s Counting? How Fraudsters and Bureaucrats Put Your Vote at Risk” (Encounter 2012) and “Obama’s Enforcer: Eric Holder’s Justice Department” (HarperCollins/Broadside 2014).