Tropical Storm Flossie was downgraded to a Tropical Depression last night (at 5pm Hawaii Time, 11pm Eastern), and this morning it was declared a “post-tropical remnant low.” The official track shows that, because of the low-level circulation center’s unexpected “right turn” east of the Big Island yesterday, Flossie never technically made landfall as a tropical storm — so it was not, in the end, the first Hawaiian landfall by an active named tropical cyclone in 21 years (since Iniki in 1992) — though the center did brush Kauai this morning as a dying depression, just before Flossie was officially declared to have dissipated. That said, the location of the circulation center is relatively meaningless in this case, because as I mentioned here yesterday evening, Flossie “split in two” as she approached Hawaii, with her low-level center turning right while her mid-and-upper-level energy and convection turned left. Thus, Flossie’s heaviest rain and thunderstorms was primarily confined (with isolated exceptions) to the Big Island, Maui and Molokai, even as the storm’s “center” raced off toward Oahu and beyond.

From news accounts out of Hawaii — and from common sense, given how Flossie evolved — it appears the storm’s impact was modest. That was not actually a surprise; Flossie was always a “fairly minor” threat, expected to have only “mild” wind impacts, as I wrote in my initial update. To the extent the storm nevertheless felt “overhyped,” that’s probably due in large part to its novelty: despite its tropical location, Hawaii is rarely hit directly by tropical cyclones, so in that sense, this was more “newsworthy” than a 60mph-weakening-to-35mph storm hitting Florida, say.

Flossie did fake forecasters out a little bit by maintaining its strength over the weekend, but the long-expected weakening (falling apart, really) did ultimately happen; it just didn’t begin in earnest until overnight Sunday night into Monday morning, when landfall was expected imminently. This simultaneous late weakening and right-hand turn (which was a mild surprise) left some in Hawaii feeling a bit underwhelmed, judging by social media anyway. That sense of unfulfilled hype and underwhelming reality, combined the perceived silliness of Flossie’s name, inspired the creation of a rather funny video, which was making the rounds yesterday, captioned “Tropical Storm Flossie has hit Hawaii. Frightening video footage.” Heh:

(For those wondering, and the many asking on Twitter, “where do they come up with these names?!” … well, an international committee of the World Meteorological Organization is responsible for the rotating lists of storm names in the Atlantic basin and the Eastern Pacific. Here’s a primer. The lists rotate and repeat every six years, with the exception of especially deadly or costly landfalling storms, whose names are retired. There will never be another “Katrina,” for instance. But there will be another “Flossie” — six years hence, in 2019, assuming there are at least six tropical storms in the Eastern Pacific that year, which is generally a safe bet. 2019’s Flossie will be the eighth tropical cyclone named “Flossie.” The first was in the Atlantic in 1978, before the current system of sextennially rotating lists was adopted in 1979. Then, pursuant to those lists, there were Pacific “Flossies” on schedule in 1983, 1989, 1995, 2001, 2007 — another close encounter for Hawaii — and, of course, 2013. No “Flossie” has ever made landfall. But 1956’s Hurricane Flossy did make landfall on the Gulf coast; it caused flooding in New Orleans, and “was the first hurricane to affect oil refining in the Gulf of Mexico,” according to Wikipedia. There was also a tropical cyclone named “Flossy” in 1996 in the Indian Ocean. Flossie, incidentally, was a fairly popular female name in the United States around the turn of the century. So anyway… now you know.)

Wet roads, courtesy of Flossie, contributed to a rash of traffic accidents during rush hour yesterday, but fears of widespread flooding (and mudslides) went mercifully unrealized. That’s because the storm’s heavy rains, which were dumping up to 4 inches per hour at times, moved so quickly that they couldn’t dump too much in any one place. The highest reported totals in the 24-hour period ending at 2am HST this morning were at Kaupo Gap in East Maui (5.3 inches), Puu Kukui in the West Maui Mountains (4.3″), Kilohana in Kauai (3.9″), Puu Alii in northeast Molokai (3.8″), and Ulupalakua on the western slopes of Mount Haleakala in Maui (3.6″). Several locations in the Big Island got between 2 and 3 inches of rain. But thankfully, no one saw totals approaching the “up to 15 inches of rain in isolated windward areas” that forecasters had feared.

Meanwhile, wind and lightning left as many as 10,000 customers without power on Maui at one point, along with around 5,000 on the Big Island. In addition, the whole island of Molokai (population ~7,500) lost power for about 45 minutes Monday evening. (Reminder/PSA: Use flashflights, not candles, during storm-caused power outages! Candles can fall over, or be blown over. Houses have burned down during hurricanes because of people using candles! /end PSA)

On Maui, according to the Star-Advertiser, lightning struck a man in the north shore community of Haiku; he was hospitalized in stable condition. Lightning also damaged a home in Kahului, Maui’s largest city, punching a 10-inch hole in the roof; a resident was home at the time, but was not injured.

The big complex of thunderstorms that developed, and began moving from the Big Island toward Maui, while I was writing yesterday evening’s blog post, appears to have been Flossie’s most dramatic and damaging component, at least in heavily populated areas. Social media was ablaze last night with Maui residents marveling at the thunder and lightning show, as Hawaii News Now’s Storify feed shows. For example:

Flossie’s sustained winds apparently did not reach tropical storm force on land. However, gusty winds, probably from that aforementioned big squall, toppled trees and utility poles in the northeast Maui village of Nahiku, blocking the Hana Highway (which anyone who has vacationed in Maui — I honeymooned there — will be familiar with) in both directions. Sounds like Jim Cantore was right when he tweeted last night that he “would not want to be driving the road to Hana right now” (although I’m pretty sure Cantore, the veteran Weather Channel/NBC storm tracker who was sent to Hilo, only to see Flossie turn right and largely spare Hilo, was actually secretly wishing he was reporting from eastern Maui).

Last but not least, a surfer was hospitalized after a shark attack in Oahu. This does not, however, indicate that Flossie was a Sharknado … OR SO THEY WOULD HAVE US BELIEVE!!! ;)

Anyway, there isn’t much more to say about Flossie. I’ll wrap up with a few pretty pictures that I saw on Twitter yesterday, then move on to a brief (final?!) discussion of Zombiewave Dorian.

So… Dorian. Or Ex-Dorian. Or Zombiewave Dorian. Whatever you want to call it, yesterday the remnants of our “survivor” storm were looking quite good for a while, and the National Hurricane Center pegged its odds of redevelopment within two days as high as 50 percent. Folks in South Florida were watching closely again.

But then an aircraft reconnaissance “hurricane hunter” airplane found no closed circulation — again — and the NHC declared that the chances of redevelopment were “diminishing.” Beaten by wind shear and sinking air, Dorian went from undead to re-dead, and now — apparently — really most sincerely dead. (Yep.)

That means, of course, that it’s time to bust out the Karl Rove jokes:

Karl Rove wants the NHC decision desk to take a closer look at the models. Still thinks #Dorian has a chance of developing & hitting Florida

The NHC puts Ex-Dorian’s chances of redevelopment in the next two days at just 20 percent:

A TROUGH OF LOW PRESSURE…THE REMNANTS OF DORIAN…IS PRODUCING DISORGANIZED SHOWERS AND THUNDERSTORMS THAT EXTENDS A FEW HUNDRED MILES EAST AND NORTHEAST OF THE TURKS AND CAICOS ISLANDS. UPPER-LEVEL WINDS ARE NOT EXPECTED TO BE CONDUCIVE FOR REGENERATION DURING THE NEXT COUPLE OF DAYS AS THE DISTURBANCE MOVES WESTWARD TO WEST-NORTHWESTWARD AT 10 TO 15 MPH. THIS SYSTEM HAS A LOW CHANCE…20 PERCENT…OF BECOMING A TROPICAL CYCLONE DURING THE NEXT 48 HOURS. SHOWERS AND GUSTY WINDS IN SQUALLS ARE SPREADING ACROSS THE TURKS AND CAICOS ISLANDS AND SHOULD BEGIN TO MOVE WESTWARD ACROSS PORTIONS OF THE BAHAMAS BY THIS AFTERNOON INTO EARLY THURSDAY.

Dorian’s remnants (an open wave)…[have] entered a high-shear environment due to a strong upper-level trough extending down into Cuba and Hispaniola. In the figure below, the wave [a.k.a. “the mid-level circulation of ex-Dorian”] is located approximately at the red X (look north of the Dominican Republic), while the upper-level trough and associated Low are shown with the green arrow and green L. This feature generates very hostile winds for the development of a tropical cyclone. 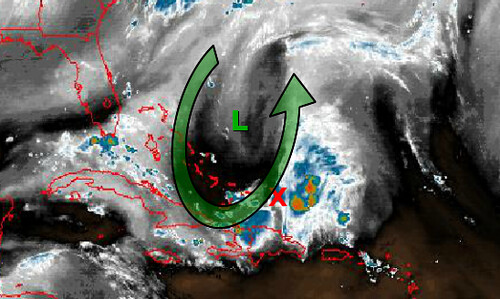 … [The wave has] an exposed low-level center and all of the deep thunderstorms displaced downshear, or to the east in this case. … Given the poor organization and the bearish environmental outlook, most models are having a hard time even tracking this feature for very long. So at least for the next few days, the only noticeable effect this will have is to bring enhanced chances of gusty winds and heavy rain to the Dominican Republic, Haiti, Bahamas, and Cuba… and eventually southern Florida by Wednesday evening into Thursday.

I’ll continue to (loosely) watch it… but this will be last blog update on Zombiewave Dorian unless there’s some good reason to mention it again!

With Dorian dead and Flossie fading, at the moment there is not a tropical storm or hurricane on earth. #tropics pic.twitter.com/hY7qxEmWJz

But don’t expect that to last:

Here is the Atlantic hurricane climatology for the 1st 10 days of Aug. Historically activity begins heating up pic.twitter.com/4NOf3vLNqh

In fact, there’s already a hint — grain of salt alert! — of a possible “proto-Erin” in the Atlantic, a ways down the line:

Latest Canadian model, about 10 days out, is saying something will spin up near the Cape Verde Islands. Hurricane season is about to pick up

And the Eastern Pacific could soon see Tropical Storm Gil, which might conceivably follow Flossie to Hawaii eventually. But, like “proto-Erin,” that’s very speculative and uncertain. For now, hurricane trackers can (probably) take a deep breath for a little while — and get ready for what will probably be a busy August and September ahead.

This will be my last Weather Nerd post until something else pops up that warrants attention (from the perspective of a possible U.S. threat). In the mean time, follow me on Twitter!