The Merriam-Webster dictionary defines an emergency as “an unforeseen combination of circumstances or the resulting state that calls for immediate action.” Perhaps the Centers for Disease Control and Prevention was unaware of this definition when it announced it would hold an emergency meeting on Friday to evaluate COVID-19 side effects in young people.

Apparently, a new federal holiday is more important than figuring out if otherwise healthy young adults are suffering cardiac complications from a vaccine for a disease that rarely causes them serious illness. On Thursday, Congress passed a bill making Juneteenth a federal holiday. Since the holiday falls on Saturday, federal government employees, including those at the CDC, were given Friday off.

On June 2, Israel raised the alarm about myocarditis and pericarditis being reported in young patients who received the Pfizer-BioNTech vaccine. Washington state sent out a similar alert on May 24 and said it was working with the CDC to investigate. Now, nearly a month after the first reports, the emergency meeting has been postponed. Because of the importance of the emergency meeting, couldn’t the CDC could have given its employees Monday off instead?

Erm what? We can’t have an EMERGENCY MEETING to discuss why young adults are being hospitalized for post-vaccine heart inflammation because of a holiday that didn’t officially exist until TWO HOURS AGO?

Why anyone thinks these bureaucrats have the best interests of you and your family in mind is a mystery. By the time the CDC finally delivers a recommendation, nearly a month will have passed from when the CDC was first alerted of the signal in the data. From a public health perspective, this is irresponsible. That high-level professionals involved in this meeting delayed it for a holiday that Congress added to the federal calendar yesterday tells you everything you need to know about government employees. Such behavior would not be accepted at any private company.

The CDC tracks adverse events from a vaccine through the Vaccine Adverse Event Reporting System (VAERS). VAERS is a signal detection system not intended to capture all adverse events related to vaccines. Estimates have shown that somewhere between 1% and 10% of all side effects that occur will be reported in this system. However, data show the system collects a much larger share of severe confirmed side effects for other vaccines. It can capture between 13% and 73% of severe adverse effects, according to some studies.

Related: Royal Caribbean’s Policy of Testing the Vaccinated Will Further Erode Confidence in the COVID-19 Vaccine

Because COVID-19 vaccines are still considered experimental and distributed under an emergency use authorization (EUA), reporting may exceed normal expectations. Today, this is the data on myocarditis and pericarditis as well as serious and life-threatening adverse events after vaccination due to any cause, including several clotting illnesses and death in the age groups of interest: 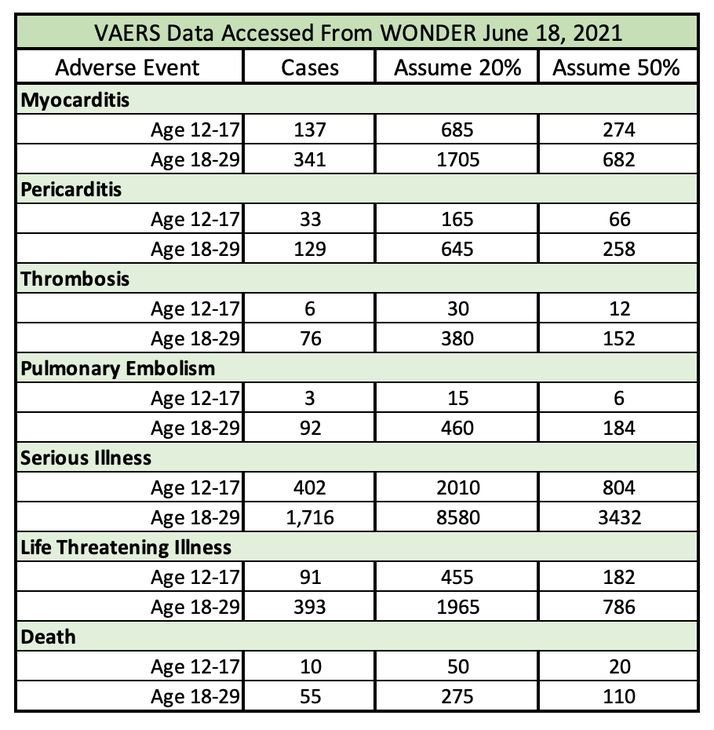 In the chart, total cases are calculated under the assumption that the VAERS collects somewhere between 20% and 50% of reports for severe adverse events. A report does not mean that the adverse event is caused by the vaccine. These reports, especially serious ones that could be happening more frequently than they do in the general population, require an investigation. From there, the information that is collected is analyzed. Based on this analysis, public health recommendations for the vaccine may change.

On April 13, the CDC paused the COVID-19 vaccine from Johnson and Johnson pending a review of six cases of an unusual clotting disorder in women. The review convened quickly and a determination was made to resume use of the vaccine on April 23.

There have been far more cases of mycarditis and pericarditis following the COVID-19 vaccine in the population of interest, according to VAERS. These conditions can cause long-term damage to the heart, which should be a grave concern for Americans under 30. Notifications started nearly a month ago, and there is a much stronger signal in the data this time. No change or pause for young adults in the target age ranges has been announced, pending a review. Now the review has been postponed due to a holiday that was literally created yesterday.

This is not a complaint about the holiday. It is a criticism of the leaders of our national health agencies using the holiday as an excuse to avoid making a determination on the relative safety of the COVID-19 vaccine. That is inexcusable.