Is Anheuser-Busch Drunk? The Beer Behemoth Is Forcing the Woke 'Gender Unicorn' on Its Employees

Another all-American brand, Anheuser-Busch, has jumped on the woke train. The maker of Budweiser, among other brands with a robust craft beer collaboration line, has partnered with radical professors in education and humanities at Arizona State University (ASU) to develop and implement a 15-module training program called “To Be Welcoming.” It is based on critical race and gender theory. According to a whistleblower who spoke with PJ Media, an e-mail from “Chief People Officer” Lindsay King announced the program on March 24, 2021.

In the letter, King uses typical language about an inclusive workplace and how diversity brings better ideas. This new curriculum follows “Psychological Safety” training for company leaders designed to “foster environments where our teams and perspectives can thrive.” The overall goal is “maintaining an inclusive work environment, one where every individual feels respected and empowered to bring their authentic selves to work every day.”

No employer really wants that. Employers want employees to come to work, complete their assigned tasks, and contribute to the success and profitability of the enterprise. Anheuser-Busch knows this and integrates these concepts into their Ten Principles. While they give a nod to diversity in the people section, the company also says:

We believe in common sense and simplicity. We operate with excellence and efficiency in all we do, always having our customers and consumers in mind.

We manage our costs tightly to free up resources that will support profitable top line growth.

There is nothing common-sense or simple about this content. Anheuser-Busch implemented a program that could not have been inexpensive to develop and deliver, taking up employees’ time and company resources. It teaches race and gender essentialism rather than valuing individuals regardless of their race and gender. The latter is required by Title VII and incorporated into every company’s EEOC statement, including Anheuser-Busch’s.

King’s letter says the company will provide leaders of employees materials to facilitate discussions. It appears that some low- and mid-level managers could be required to teach these concepts. The materials kick off with a Diversity Awareness Quiz that consists of ten questions, all relatively easy to game. Most ten-year-olds could tell you what the answer should be.

One image in the training materials features a Gender Unicorn. The Unicorn is a Trans Student Educational Resources (TSER) production and was initially intended for school-age children. According to the organization’s website, the implementation of this curriculum has not been without controversy in K-12 settings. ASU incorporated it into the Anheuser-Busch training. It educates employees on far-left gender ideology and claims your sex is “assigned” at birth rather than a function of your biology: 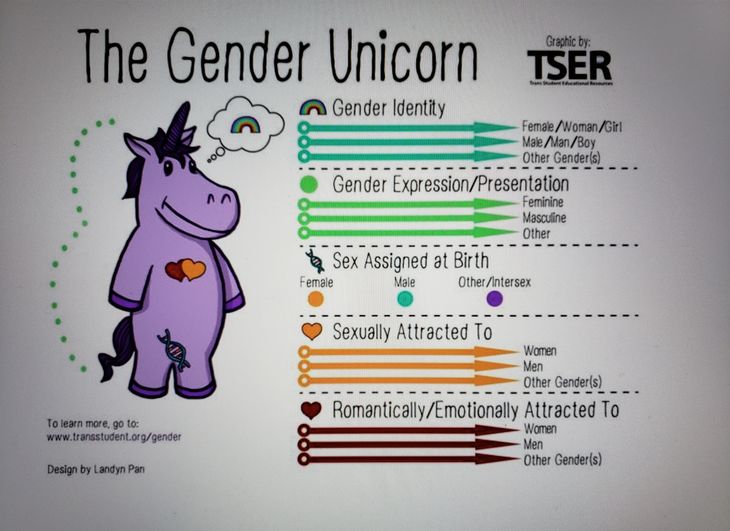 Accompanying the graphic was a “Dialogue Challenge,” which is an example of corporate-encouraged struggle sessions on topics no one wants to discuss at work. Does anyone need or want to discuss their “experience of gender and overall idea of gender” at work? 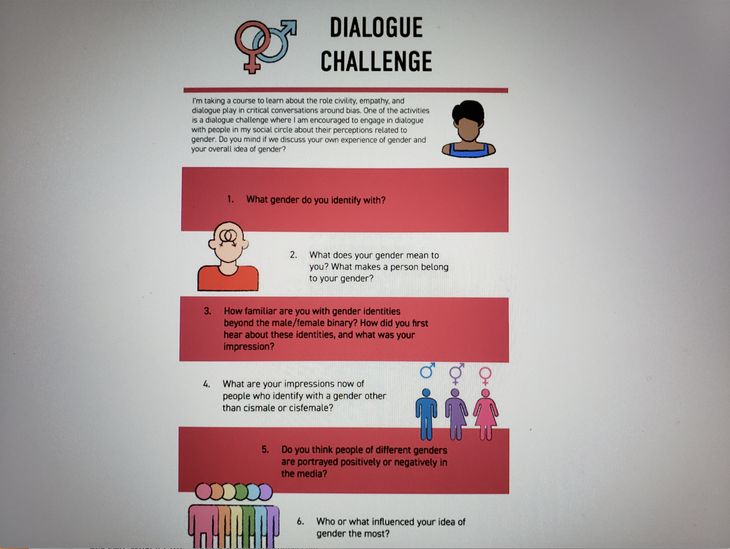 The whistleblower sent nearly 140 screenshots of the program, instructor bios, resources, and bibliographies. You can see more of the training materials here. In the gender-identity modules, there was an entire screen showing terms that may be unfamiliar to employees unless they are knee-deep into the politics of the Church of Woke™. 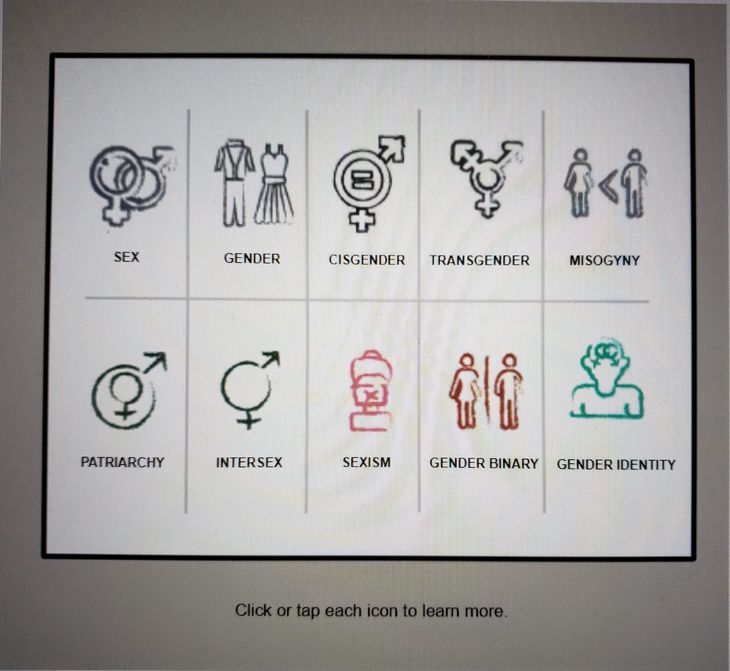 When training participants click on a term, the definitions pop up. These come from the radical left gender ideology that divorces gender from biological sex. It is pretty easy to understand how this would be a foreign language to many Anheuser-Busch employees. 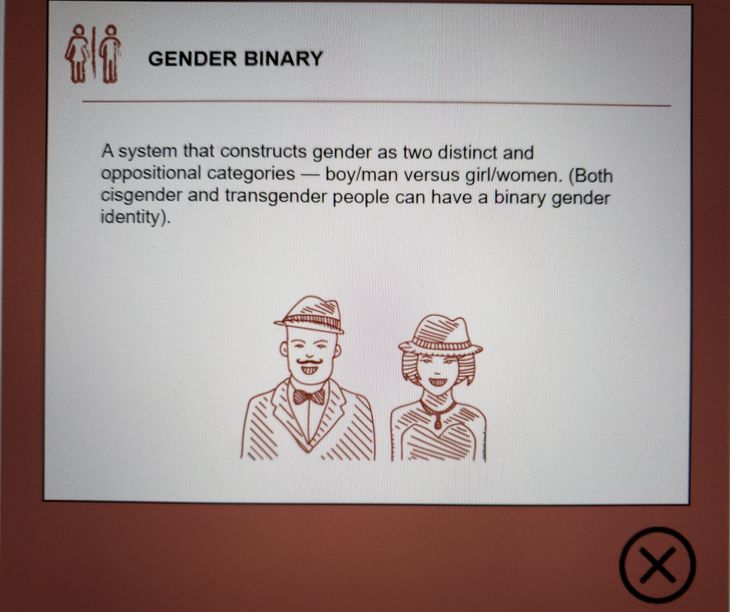 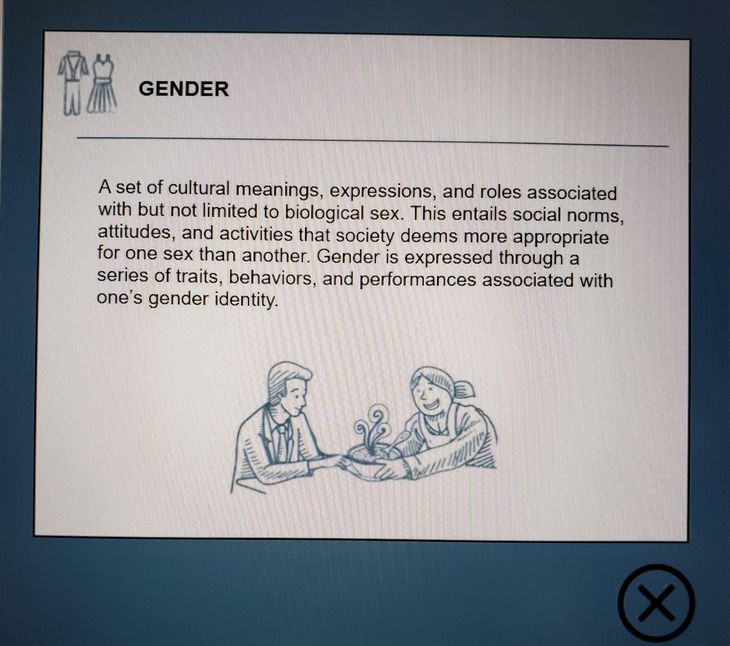 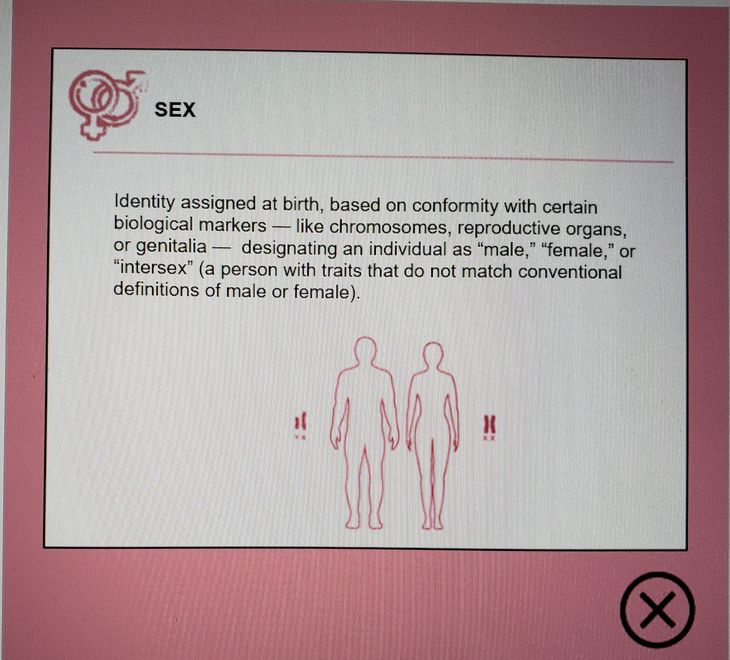 There are also quizzes. It is difficult to understand why it would matter to people who make and sell beer how prisoners are housed based on how they identify. And how many employees are wondering exactly how many people at Anheuser-Busch use a pronoun that is outside the norm? 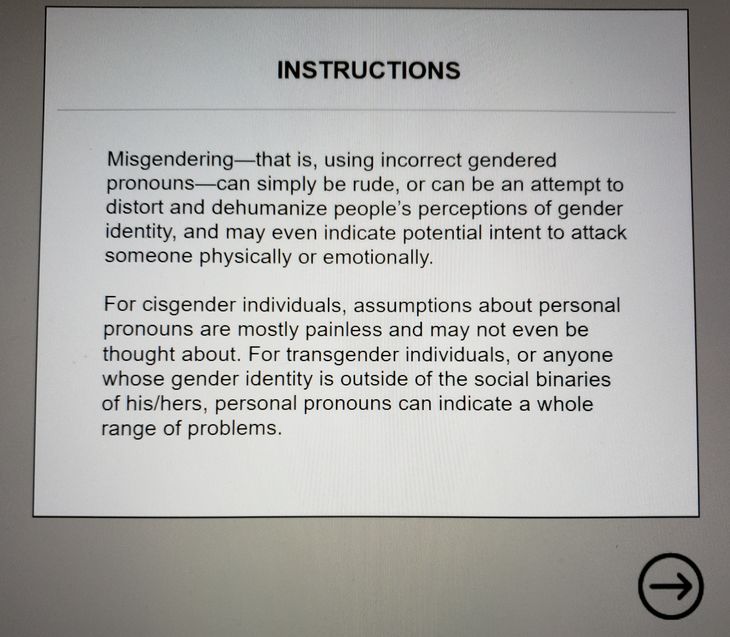 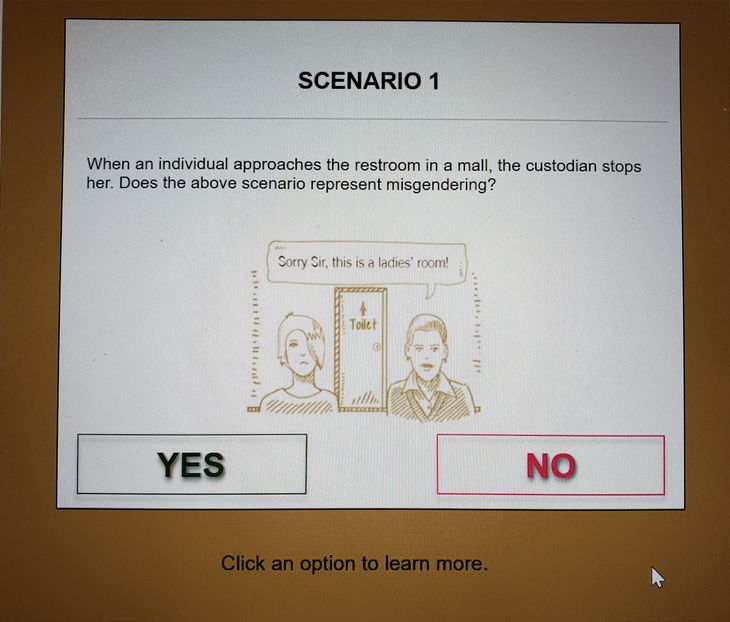 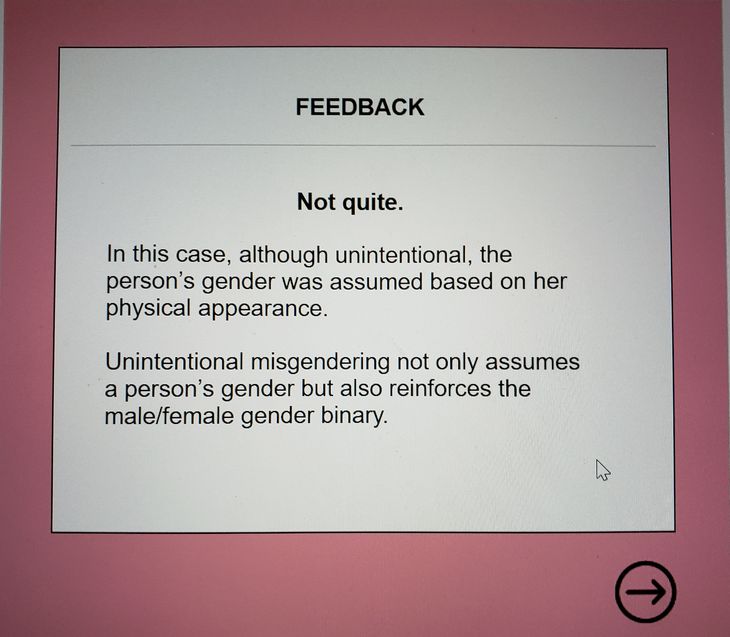 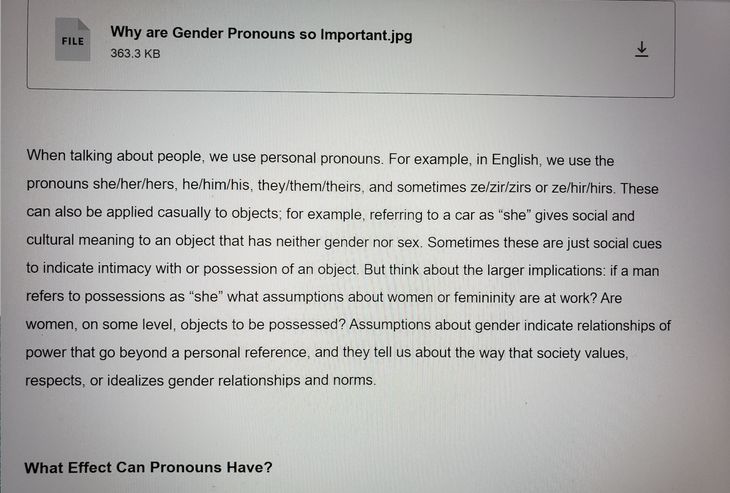 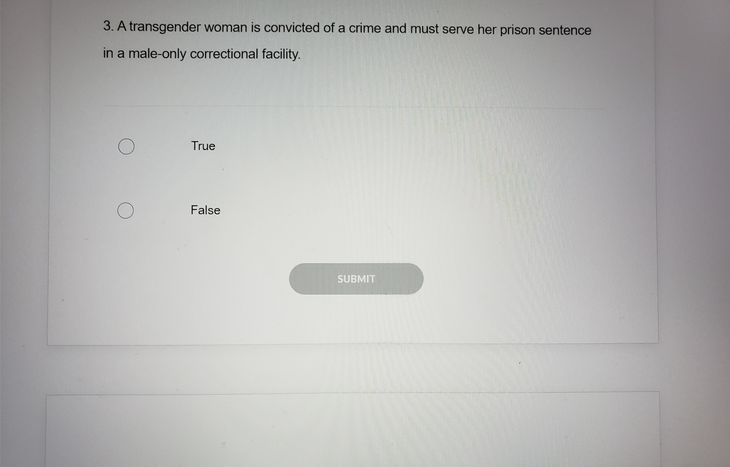 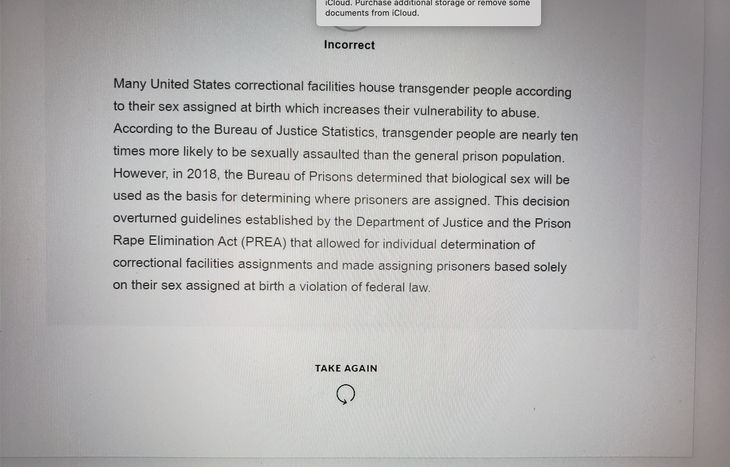 The link between content like this and building effective, efficient teams and making beer is tenuous at best. The training also contains content on racial essentialism. It covers concepts such as systemic bias, denies reverse racism, and discusses equity, privilege, intersectionality, and microaggressions. Perhaps most egregious, it spends time discussing implicit bias and unconscious bias. The most extensive study to date of over 80,000 people shows there is no connection between the results of the most common test of implicit bias and behavior:

Researchers from the University of Wisconsin at Madison, Harvard, and the University of Virginia examined 499 studies over 20 years involving 80,859 participants that used the IAT and other, similar measures. They discovered two things: One is that the correlation between implicit bias and discriminatory behavior appears weaker than previously thought. They also conclude that there is very little evidence that changes in implicit bias have anything to do with changes in a person’s behavior. These findings, they write, “produce a challenge for this area of research.”

The whistleblower included screenshots of the bibliography of sources the training used. It includes Robin DiAngelo’s White Fragility and other research and writing from obvious left-wing sources. The source also sent screens of the additional resources for participants in the training. It is more dense and populated than the syllabus for most college courses and would require hours of reading or watching videos for just a few of the 15 sections. Again, the resources are exclusively slanted in a left-leaning direction. They include content from organizations such as:

The source told PJM that this content is making employees less engaged and less interested in the success of Anheuser-Busch. In recent weeks, we have seen similar stories from Under Armor, Amazon, and Disney. When contacted for comment, Anheuser-Busch did not respond. If large companies continue down this path, employees who want to excel in what they do—rather than work in a company preoccupied with identity politics—will take their skills and talent elsewhere.