'Bind Tongues and Keyboards': Controversial Preacher Threatens to Sue Anyone Who Talks About His Arrest for Domestic Assault

Some people, even the ones who say they are free speech advocates, don’t know how the First Amendment works. Controversial Baptist preacher Nathan Rager, who often publicly decries censorship, thinks he has the power to “bind tongues and keyboards” from discussing actions that led to his arrest for domestic assault. He wrote in a now-deleted tweet, “I ask for prayers for my wife, who struggles with mental health. Also for my sabbatical from public ministry to heal my family. We ask all professing Christians to bind their tongues & keyboards, & give us space to heal. Failure to do so will result in future legal action.” 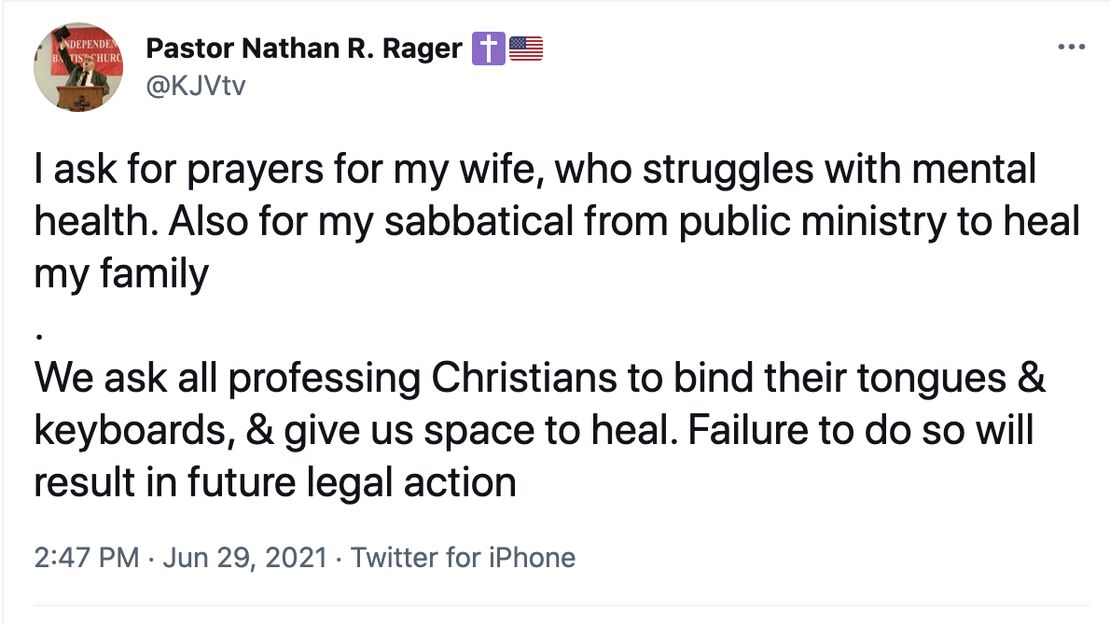 Sir, that’s not how any of this works.

In America, when you get arrested and arrest records are public, the media and the general population have the legal right to comment on it and have opinions about it. There is no possibility that Rager can successfully sue anyone for discussing his public legal predicament. As a “pastor,” he should know this and not attempt to mislead or intimidate people for his own benefit.

According to public police records:

Following a verbal argument…the defendant began running towards them and attempted to grab them while carrying the child they have in common. The victim screamed for help while in the stairwell of the apartment complex they reside in and were cornered by the defendant. While being cornered by the defendant and being unable to move, and holding their 2-year-old child, the victim believed the defendant was going to attack them, creating a well-founded fear. The incident was observed by an independent witness who contacted 911, and their statements were consistent with the victim’s.

It is unknown if Rager’s wife suffers from mental illness, as he claims. It is not unusual, however, for domestic abusers to claim their victims are mentally unwell in order to deflect the blame from themselves. It is a well-known tactic. Rager’s Twitter feed is full of bombastic and angry tweets that seem antithetical to Christian philosophy, mocking other churches relentlessly and using inflammatory language meant to divide and upset people. There is a multitude of YouTube videos of Christian podcasts refuting Rager’s teachings and bringing attention to his errors.

Rager is about as likable a character as Fred Phelps, who made his fame by picketing the funerals of soldiers and terrorizing their families with signs that say, “God Hates Fags.” My family was one of those unfortunate enough to be attacked by Phelps’ terror cell so I am particularly sensitive to this issue of self-proclaimed Christians using their platforms to upset and hurt people instead of inviting them to Christ’s love. I can’t even put into words the amount of pain these characters cause others.

(As a side note to those wondering, a group of rough-looking bikers protected my family from Phelps and his crew on that terrible day when we were grieving the loss of our hero and, whatever their religious beliefs were, it was as if the angels of heaven descended to block us from the demonic protesters.)

Rager was part of the Southern Baptist Convention, which has recently faced protests about cover-ups within the church over abuse allegations. Though Rager left and joined the Independent Fundamental Baptists (IFB), the culture in many evangelical fundamentalist organizations is under fire by former members who say abuse is not only covered up but enabled by fundamentalist teaching. I recently interviewed Sarah McDugal of Wilderness to Wild, an organization that helps women leave abusive relationships and focuses on church abuse. We discussed the real problems with organizations such as the IFB that played a part in covering up Josh Duggar’s admitted crimes against children. You can hear it here if you are a VIP subscriber (sign up today!). Chicago Magazine reported that after finding out Josh Duggar had molested two of his sisters and some of their friends, the Duggars chose to send him to Bill Gothard’s “treatment” center:

When Duggar’s parents discovered the teenager’s transgressions, they sent him not to a traditional treatment center but to an IBLP [Institute for Basic Life Principles] facility in Little Rock, Arkansas. The Duggars had been involved with IBLP for nearly a quarter of a century; specifically, the family belonged to IBLP’s homeschooling arm, the Advanced Training Institute.

But the IBLP run by Gothard was covering up its own huge sexual abuse scandal with Gothard at the center of it. The organization issued a statement admitting that Gothard had acted wrongly, and he later retired.

However, the review showed that Mr. Gothard has acted in an inappropriate manner, and the Board realizes the seriousness of his lack of discretion and failure to follow Christ’s example of being blameless and above reproach.

The alleged victims were unable to successfully sue him due to statute-of-limitations complications.

“DARVO refers to a reaction perpetrators of wrongdoing, particularly sexual offenders, may display in response to being held accountable for their behavior,” he said. “DARVO stands for ‘Deny, Attack, and Reverse Victim and Offender.'” Skwarczynski says that Rager’s post exhibited this. He explained:

[Rager] publicly didn’t exhibit any sign of issue until my post called out evidence 10 days later. (He was denying by omitting details). He attacked (threatening legal action against those who didn’t “bind their tongues and keyboards”). He reversed roles and made himself the victim (he made it about him healing his family as opposed to confessing the wrong of threatening his wife) and made her the offender by citing her “mental health issues.”

Skwarczynski pointed to the problem of some Christian sects that have a poor understanding of mental health. “Mental health is misunderstood by many Christians and weaponized to discredit abuse survivors.” There are some fundamentalist churches that counsel against seeing a therapist or psychiatrist and only recommend prayer as the remedy for mental illness. These teachings can lead to suffering for the people trying to live with a crippling illness that could be easily treated with medication. Others view mental illness as a sign of satanic influence, which can lead to spiritual abuse.

“Layer that with how women are treated in complementarian environments like the IFB and SBC [Southern Baptist Convention] plus the unbridled authority of leaders… It’s not a safe place to be a woman or a survivor,” said Skwarczynski.

A GoFundMe was set up to support Rager’s wife as she attempts to leave her marriage.

This money is being raised for the previous wife of Nathan Rager. Please understand her need for safety and privacy. Above all, let’s uphold her in prayer. She has escaped her relationship which became extremely difficult and impossible to bear. I cannot give details, but she has been incredibly isolated and this is a big step for her.

The purpose of this fundraiser is to provide financial help to her. Nathan has no access to this money whatsoever. Everything is completely separate. She has not asked for this, but has accepted it as a gift from those who are willing to help. Many have reached out to me and have been where she is right now.