This report is part 14 of an investigative series looking into reported corruption in the Missouri Judiciary and family courts. For the rest of the investigation visit the catalog here.

Mikaela Haynes was fourteen years old when she took her own life after being repeatedly forced to spend time with a convicted child rapist, her father Charles Haynes. Haynes is currently in prison in Missouri serving a sentence for raping Mikaela’s half-sister, Melissa, when she was a young teen.

The nightmare for this family began when Melissa gave her mother a note disclosing that her stepfather, Cynthia Randolph’s husband Charles Haynes, had been abusing her for years. Randolph left with her three children, reported the abuse to the police, and filed for divorce. Haynes was arrested, charged, and pleaded guilty to sodomizing Melissa.

Guardian ad litem (GAL) Jennifer Williams was appointed to the case because of the abuse allegations. Instead of protecting the children from Charles Haynes, an admitted child rapist, Williams acted tirelessly to give him and his enabler mother access to the children, while accusing Randolph of “educational neglect” for homeschooling the girls. Even after putting the children into a public school, where both children made the honor roll, proving there had been no educational neglect, Randolph lost custody of the girls to Haynes’s mother Bernice because of Williams’s influence over the court.

Randolph reported that Mikaela became despondent after finding out that Williams, who was entrusted to act in Mikaela’s best interest in the custody dispute, announced her intention to testify on behalf of Charles Haynes at his sentencing hearing after he pled guilty to sodomizing Mikaela’s sister. “On 11-23-2018 she heard that Jennifer Williams, her own guardian ad litem was going to be a character witness on behalf of Charles Haynes for the sexual molestation of Melissa. That devastated [Mikaela],” Randolph told PJ Media. “She said ‘I’m going to hang myself before I go back to foster care.'” Mikaela hung herself in the family home the very next day.

PJ Media obtained the court transcripts of that sentencing hearing at which Williams did indeed testify, even after her minor client killed herself, downplaying the danger that Charles Haynes posed to teen girls. “I do however have concerns that father and his family have not seemed to be able to have any access to the children for quite some time,” she said at Haynes’s sentencing hearing for sodomy of a minor.

What do you call it when a guardian ad litem advocates for a convicted child rapist to have access to teen girls even after one of them commits suicide? #JenniferWilliams #RipleyCountyMo pic.twitter.com/Z1uKC8Ilus

Before Mikaela’s death, Williams showed a bizarre affection for Charles Haynes and his mother during her time as the GAL and continually insisted that his daughters must have a relationship with the convicted rapist and his enablers. On Williams’s recommendation, the girls were put into the sole custody of their 90-year-old paternal grandmother, Bernice Haynes, who had a known history of not supervising her rapist son when he was in the presence of the girls after Williams alleged they suffered from “educational neglect” in Randolph’s care. Not only did she not supervise her son with them, but Mikaela reported to several doctors that her grandmother was drugging her with massive doses of Benedryl to “help her sleep.” This began the nightmare that ended with Mikaela’s death by hanging.

Butler County, Mo., Judge John Shock acknowledged that Bernice Haynes did not properly supervise the convicted child rapist but gave the children to Haynes anyway, despite multiple therapists and Children’s Division reports saying Bernice Hayne’s house was not safe for the girls and they should be returned to their mother. 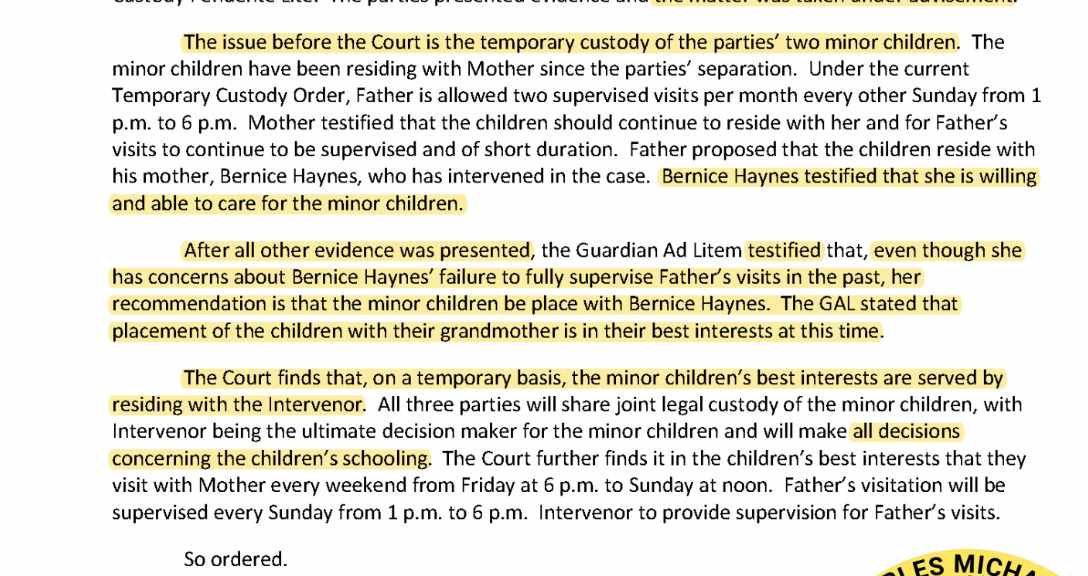 Judge Shock wrote on December 15, 2016, “After all other evidence was presented, the Guardian Ad Litem testified that, even though she has concerns about Bernice Haynes’ failure to fully supervise Father’s visits in the past, her recommendation is that the minor children be placed with Bernice Haynes.”

Williams recommended removal of the girls from their mother’s custody because she had concerns about “educational neglect,” “influence,” and “manipulation,” but admitted that none of her concerns were “hotline-able,” meaning that nothing she was concerned about was a legitimate or lawful reason to take children from the care of their mother. She also accused the rape victim, Melissa, of “manipulation,” in a shocking display of victim-blaming.

Williams wrote in an email,

Randolph denies all of those allegations and pointed out that if any of those things had occurred, Williams could have made a hotline call to report the alleged abuse, prompting a social services investigation. She never did. “Severe punishment” is child abuse. Why didn’t Williams report that alleged punishment if she believed it happened? As a mandated reporter, she is required by law to report abuse but admitted in her own email that nothing she was concerned about was “hotline-able.”

PJ Media is in possession of multiple Missouri Department of Social Services reports that affirm that Randolph’s home was safe. “There are no concerns with [Randolph] or in her home and there hasn’t been proof of any since the beginning of the case,” wrote social services in a letter to Judge Shock.

After Mikaela was put into the custody of the 90-year-old who gave Chuck Haynes full and unfettered access to his teen daughter, Mikaela’s mental state deteriorated to such a degree that she was cutting herself and was admitted into a mental hospital, where she was drugged with a medication, Remeron, that has a listed side-effect of “suicide.”

When Randolph objected to the use of that drug, the doctors turned on her and reported that she was uncooperative, and banned her from the hospital. “I went there every day that I could,” said Randolph. “They wanted to give her a medication to help her sleep and wanted me to sign it.” Randolph refused after seeing the scary side-effect. “They would never let me back into the hospital to see her after that.”

Mikaela was put into foster care after her nine-day stay at the hospital. The doctor would not allow Mikaela to go back to Bernice Haynes because he believed she was suffering abuse there. But for some reason, he also decided she couldn’t go back home with Randolph, despite the absence of any evidence of abuse in her home and repeated requests by Mikaela to go back to her mother.

In 2017, the state returned the girls to Randolph’s home. The children’s therapist reported that the girls were doing very well back at home. Their grades were good, their mental state was improved, and they were thriving and happy. On December 15, 2017, Dr. Jerry Marks wrote, “Mikaela has achieved an honorable mention on the honor roll this past term and Sara is on the honor roll this term. Both girls talk about feeling happy to be back with their Mother and are having a hard time understanding the reason they were placed in foster care in the first place.”

Despite how well they were doing, Williams continued to try and reunify them with child-rapist Charles Haynes. He was on trial for raping Melissa at the time. Dr. Marks accused Williams of witness tampering and professional misconduct. Marks wrote on March 20, 2018, “I have to be on the record saying that I think what has happened in the last two months with Mikaela and the GAL is a form of witness tampering,” after Williams was continually showing up at Mikaela’s school with gifts from her father and grandmother. Marks had repeatedly warned Williams and the court that any contact, including gift-giving, should not be allowed under any circumstances. As a result of this continued pressure from the Haynes duo facilitated by Williams, Randolph reported that Mikaela became very ill with stress disorders. Marks submitted affidavit after affidavit begging the court to stop allowing the Haynes family access to the girls. No one listened.

Marks also wrote that he believed that Charles Haynes had molested Mikaela.

“I believe that [Mikaela] is also a victim of her Father but she is unwilling to disclose to me because of what she has been through and she has watched what her sister has been through with the court process. If she does disclose to me that she has been sexually abused, I am a mandated reporter and will be required to call the Division of Social Services. This will trigger further issues with the case…” Marks wrote.

Mikaela did disclose sexual abuse to her foster mother but knew not to speak to a mandated reporter because, in her experience, reporting abuse to the experts only gets the abused child into more pain and suffering.

After Mikaela’s suicide, Dr. Marks submitted another letter to the attorney general of Missouri trying to get law enforcement to do something about Williams and her repeated violations in this case. The letter said, “It is my understanding that the GAL who was appointed to the cases of both Sara and Mikaela testified at trial on behalf of Mr. Haynes. This testimony, if it occurred, is, in my opinion, more than just a conflict of interest and may rise to the level of professional misconduct…and may have been the cause of Mikaela’s death by suicide.”

The attorney general did nothing. There has been no official investigation into the conduct of GAL Jennifer Williams, the judge, or the other attorneys involved in the case who facilitated a child rapist’s repeated access to the children.

Mikaela Haynes loved sign language and was studying diligently to become fluent. “For part of Mikaela’s homeschool curriculum, Mikaela studied and loved ASL, (American Sign Language). She spent hours watching YouTube videos and practicing it. There was a deaf elderly couple that she went a few times to see and practice it live,” said Randolph.

Mikaela also loved her sisters and cooking. In her suicide note, she wrote, “None of this was or is your fault. I want you to keep being you. Don’t let this affect you in a negative way. I love you with my whole heart. I can’t keep doing this anymore….thank you, Mom, for making my life on this flat earth as easy as possible and always doing the best for me. You don’t know how sorry I am.”

PJ Media attempted to contact Jennifer Williams to ask her why she made the decisions she did in this case. She did not respond. She did, however, withdraw from the case on April 27, citing the press inquiry and public attention as the reason.

Williams currently works for the University of Missouri Extension as a county engagement specialist in community economic development.