A recent Politico investigation found that California’s first Department of Education deputy superintendent of equity, Dr. Daniel Lee ,was hired even though he “lives in Philadelphia and has a separate job there, more than 2,500 miles away” from the California schools he was charged with “fixing.” Afterward, California Assemblyman Kevin Kiley (R-06) sent a letter to the Government Operations Agency in Sacramento questioning the lawfulness of Lee’s hiring. 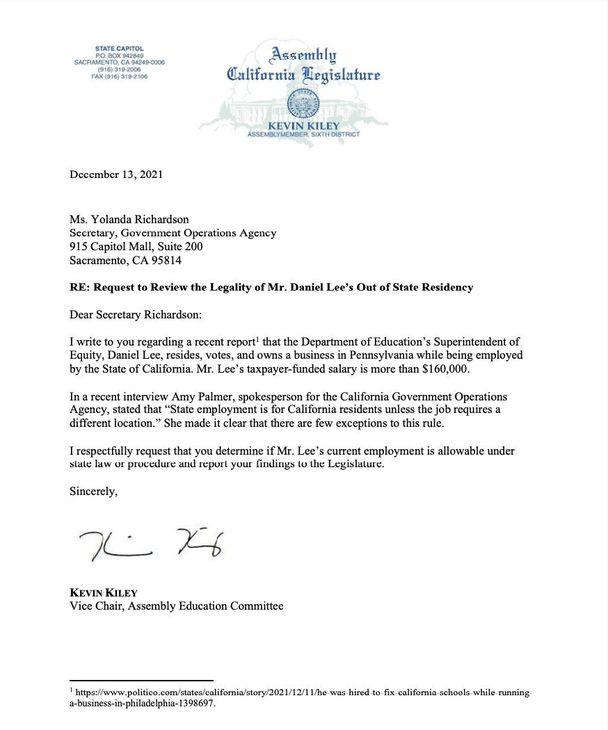 Remarkably, only a few days later Lee resigned from the position. However, if you’re like me and don’t live in woke world, you probably didn’t even know there was such a position as a deputy superintendent of equity; nor is it likely you know what such a creature does. Don’t worry, no one really knows what he does.

So how did Lee get this cushy no-show state job that pays nearly $180,000 in taxpayer-funded salary? Kiley said the brand-new position was created by State Superintendent of Public Instruction Tony Thurmond specifically for Lee, his personal friend and former groomsman. On June 4, 2020, Thurmond announced several “multi-pronged partnerships and initiatives” to address so-called implicit bias and racism in California schools. Among those partnerships included in the announcement was “Dr. Daniel Lee, President-Elect for the New Jersey Psychological Association and Principal Consultant of N-PSY-T Psychological Services, who is developing a model for schools to address the impacts of implicit bias on student achievement.”

The Department of Education claims a deputy superintendent of equity concentrates on equity in areas like student counseling, social-emotional learning, and other educational programs—areas which Lee has no actual experience in performing within the academic setting of public schools. Of course, “equity” is that favorite woke term of the left designed to sound like “equality,” though it is in actuality anything but equal. “A good rule of thumb in California politics is when you hear the word ‘equity,’ something fishy is afoot,” said Kiley.

The Superintendent of Equity scandal illustrates a basic fact of life at the Capitol. Our politicians think they can get away with absolutely anything. https://t.co/UuufrRLtek

One has to wonder how someone in Thurmund’s position could possibly not know hiring Lee was at minimum unethical and at most illegal. Did he really think a scandal involving the hiring of his out-of-state, unqualified pal for a state position under his direct management was really the best way to “fix” California public schools? It does boggle the mind, but it’s the left we’re talking about here–so it wouldn’t be a surprise if he feigned that he didn’t know. At least Lee has resigned and (for now) none of California’s tax money is being wasted on a useless position.

Schools chief Tony Thurmond should repay taxpayers for illegally hiring his Philadelphia buddy as “Superintendent of Equity.” He has plenty of union money in his campaign account.

Still, many questions remain:  Will Lee be required to repay the taxpayers of California in full? Will Thurmond be censured or otherwise punished for his illegal and nepotistic hiring practices? Should Thurmund be allowed to keep his job? Exactly how many other California bureaucrats have been hired under similar circumstances? Does California even need a deputy superintendent of equity in the first place?

Gwendolyn Sims is a freelance contributor to PJMedia where she covers current news, politics, and culture. She is based in Southern California—for now—but her heart remains in Real America.  Follow her on Twitter and Parler.
Read more by Gwendolyn Sims
Tags: CALIFORNIA EDUCATION WOKE
SHOW COMMENTS