The British Blockade of the Jews: Resisters Murdered

The British media has been righteously savaging Israel for actually stopping the terrorist flotilla, referring to the vessels’ interception as a premeditated “attack” and describing it as a “brutal” assault without presenting the Israeli position. How quickly they forget their own history. The British sent rusty boats filled with Jewish Holocaust survivors right back to Europe. They killed some resisters and risked murdering many orphaned children, teenagers, elderly, emaciated Jews, by roughly and dangerously boarding their boats and arresting and imprisoning all whom they found. They put them in detention, concentration camp-like Hell Holes on Cyprus. 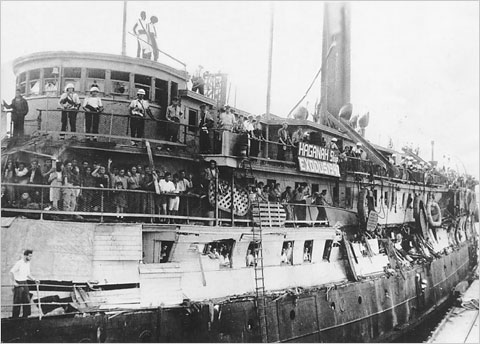 The “Exodus 1947,” a ship filled with Jewish Holocaust survivors who wanted to immigrate to Palestine, after it was seized by the British Navy in a deadly struggle at sea and brought to Haifa in July, 1947.

The British did not encounter well-funded terrorists, world-famous “activists,” hardened politicals, or those who longed for martyrdom. The Jews did not come to fight and die. They came to live, just barely. And, they encountered young, idealistic sailors who were risking their own lives to save a few Jews.

The British Jew-haters are not revisiting their own history in the matter of naval blockades. But my friend, the heroic Dr. David Gutmann remembers. Here is his wake-up call to all those who choose to forget their own history.

I have just viewed a video of a smug, morally superior BBC anchor bullying the Israeli spokesman Mark Regev about Israel’s “unspeakable” action against the blockade running Mavi Marmara – the Turkish ship that attempted break the Gaza blockade.

A naïve viewer would assume that no other country – and certainly not Britain – had ever taken violent action to preserve a blockade against its challengers. The naïve viewer would be quite wrong. There follows my eyewitness report of typical Royal Navy actions against Jewish blockade-runners, ships laden with Holocaust survivors, in ‘46 and ‘47.

Most of the Jews who survived the Holocaust were determined to leave the killing ground of Europe. The majority of these had Jewish Palestine as their goal. Had she survived the death camps, Ann Frank could have been among them. The chief post-war priority of the major Jewish underground, the Hagana, was to open Jewish Palestine to unrestricted immigration, via blockade running, and attacks on Brit radar installations.

The post-war British labor government, until 1948 the mandate power in Palestine, was equally determined to prevent the surviving Jews from reaching the Holy Land. They based their opposition on the “White Paper” policy, limiting Jewish immigration to Jewish Palestine, that had been mandated in 1939, Just before WWII began.

Despite a grueling post-war recession, the White Paper policy was nevertheless rigorously maintained; the Brit blockade of Palestine was much more extensive and intensive than the current Israeli blockade of Gaza. It entailed dense naval and air coverage of the Palestine coast, backed up by 100,000 troops, coastal radar stations, and an international intelligence network.

Unlike the Mavi marmara, our refugee ships were not elegant cruisers; they were rust-buckets. The human cargo was not made up of Swedish Nobel Laureates or Left-y American legislators or activists with time on their hands; they were Holocaust survivors — many of them orphaned children who had been promised stable, nurturing homes on Zionist kibbutzim. A child survivor arrives at Haifa port on board the Aliyah Bet ("illegal" immigration) ship "Mataroa." The British denied the passengers entry into Palestine and deported them to Cyprus detention camps. July 15, 1945.

I had been a Merchant Seaman during WWII. Hearing that the Jews wanted sailors for their Aliyah Bet, clandestine boats, I Volunteered – first with the Irgun Zvai Leumi, then with the Hagana.

My First ship (“Ben Hecht”) sailed from France, and was captured by Royal Navy destroyers off Haifa. Having declared that we were American sailors, our crew was jailed in Acre Prison for “aiding and abetting the Illegal immigration”. Sensitive to the resulting public agitation in the US, the Brits soon released us.

My second ship (“Geula”) sailing under Hagana command picked up people in Bulgaria and was, as before, captured in international waters off Haifa. Disguised as refugees, we sailors went with the people into the prison camps built by the Brits to hold the Jewish “Illegals” on the island of Cyprus.

Here is how the Royal Navy would seize our blockade runners: The Brit destroyers, guided to us by radar and Lancaster patrol planes, would approach close enough to estimate the height of our bridge above sea level, and boarding platforms based on these measures would be quickly carpentered. After a last warning to turn away from Palestine, the boarding destroyer would, in international waters, sideswipe us at speed, thereby bringing it’s boarding platforms into direct contact with our bridge deck. Royal marines armed with clubs and back-up guns would then swarm aboard to seize the bridge and engine room.

Ramming was a very dangerous tactic to use against our frail rust-buckets on the high seas, crammed as we were with equally frail men and women, children and babies, A hull tear resulting from the ramming could have sent our ship and our human freight to the bottom in minutes, while the Brits piously disclaimed any responsibility for the loss of life. They had, after all, warned us against continuing.

Many of our ships resisted the boarders — though never with knives and firearms as on the Mavi Marmara.  Our people fought with non-lethal fire hoses and tin cans. Retaliating, the Royal Marines would lay about them quite brutally, and would on occasion resort to guns (A comrade of mine was shot in the butt as he attempted to nail the Star of David to the Arlozorov’s signal halyard). Refugees who had survived Hitler became Britain’s victims in protracted fights (as on the Exodus, where four refugees were killed).

While there was some international outcry against these harsh measures, the Brit public kept quiet, not only about the harsh blockade, but also about the subsequent incarceration of the captured refugees in the Cyprus prison camps. Needless to say, these were not up to Geneva Convention standards, which call for adequate housing and sanitary facilities. But on Cyprus, where our water was rationed, we lived in unheated Nissen huts, among open latrines, their flies and their stench.

Nevertheless, the British Mandate authorities insisted that these were “Internment facilities,” And the Illustrated London news, impressed by the ocean frontage at Caraolos camp, ran a feature titled “Sea-side Holiday camps for Jewish Queue Jumpers.” But both the Brit officials and the Brit media were misinformed. When your compound is enclosed in barbed wire, with guard towers every two-hundred meters or so, and armored cars patrol the perimeter, then you are in a genuine prison camp, and likely to get shot if you attempt to escape. Hundreds of Queue-jumping Holocaust orphans ended there, behind the wire.

The captured “Peace Activists” of the Mavi marmara were repatriated by Israel within days. Most of the Jewish “Illegals,” including the orphans,  remained as captives of the Crown on Cyprus until the State of Israel was established, and the White Paper restrictions were voided.

Perhaps the Great Souls of the BBC could revisit their nation’s history as a major blockader – of the French, of the Germans, and of the jews –  and redirect their moral indignation closer to home.