Meir Dagan was laid to rest on a rainy morning in March 2016 at a military ceremony in north of the country. The Israeli prime minister, elected officials, and generals stood at attention in front of Dagan’s coffin, a pine box draped with the Israeli flag, as the rain fell without pause. Dagan was eulogized as one of the nation’s great military and espionage heroes.

Meir Dagan was born in 1945 inside the smoldering debris of the Holocaust in the former Soviet Union. His family made it to Israel when Meir was five, newcomers arriving to an uncertain future in an infant nation made up primarily of new immigrants and refugees. The Holocaust never left young Meir’s DNA. He carried it with him as a chip on his shoulder and fuel to fire his military aspirations. He made the army his life and served in the paratroopers as a commissioned officer. He fought gallantly in the Six Day War and befriended a swashbuckling general named Ariel Sharon. The friendship between Dagan and Sharon would last a lifetime.

In 1970, Sharon ordered Dagan to end a terrorist uprising in the Gaza Strip by any means necessary. Ever the visionary, Dagan formed an undercover commando force that masqueraded as local Palestinians and infiltrated every aspect of the terrorist safe haven. The unit and its operations rewrote the counterterrorism manual. Meir Dagan fought in the 1973 Yom Kippur War, displaying leadership and courage under fire. In 1982, he led tanks into Beirut during Israel’s Lebanon War. The fighting was fierce and bloody and Dagan’s brigade suffered heavy casualties; some of his closest friends were killed alongside him in the bitter fighting.

When Dagan led operations against Hamas and the Islamic Jihad, groups that attacked Israel’s cities with suicide bombers, he realized that a new tactic was needed to unconventionally battle terrorism off the battlefield. Islamic and nationalistic passions sparked the violence, Dagan realized, but money was the oxygen that fueled its fires. An analysis revealed that the sums of cash consisted of hundreds of millions of dollars, money that came in from Iran and the Gulf Arab states, as well as from donations made into charitable foundations based around the world. If Israel could prevent the terrorists from accessing this money, Dagan believed, the terrorists wouldn’t be able to fund the cells, the bombers, the salaries, and the slick propaganda machines that made the carnage possible.

In 1996, Dagan was placed in charge of Israel’s Counter-Terrorism Bureau. It was here that he created Harpoon, a financial counterterrorism task force encompassing representatives from the military, the intelligence services, the police, the customs service, and other ministries. In 2002, when Prime Minister Sharon appointed his old friend to serve as the head of the Mossad, Dagan brought Harpoon to Israel’s intelligence service and it became operational. Harpoon’s calling card was “follow the money, target the money, and kill the money.”

Harpoon targeted the hundreds of millions of dollars that Yasir Arafat stole from Western aid money that was used to fund suicide bombers. Harpoon mobilized military units to target the money men who made millions in profits handling wire transfers and loans. Dagan ordered his officers to undermine the black markets, and to confiscate funds destined for terrorist cells. Even the banks the terrorists used were placed inside the gun sights. Harpoon’s operations made it prohibitively expensive and dangerous for the terrorists to move money around. Once the terror chiefs couldn’t pay salaries or buy the materials needed to blow up buses, the suicide bombings ended.

When Hezbollah launched a war against Israel in 2006, Dagan urged Israeli military commanders to bomb the hell out of the Beirut banks that held all of Hezbollah’s cash. Once the banks were obliterated, Hezbollah ran short on money and agreed to a ceasefire. Harpoon also attacked a drug smuggling empire that Hezbollah ran in South America to finance its efforts against Israel and the United States. Harpoon joined forces with American law enforcement to cripple and undermine the drug narcoterrorist operation in the Middle East, Dagan’s spies and commandos saw to it that the shipments of drugs and cash never reached Hezbollah’s fortified bunkers.

Harpoon targeted banks and bankers, using sophisticated computer hacking to peek inside Hezbollah’s inner most financial secrets; scams were used to defraud Hezbollah’s top leadership. And, using spies and lawyers, Harpoon launched a crippling offensive against a Lebanese bank that helped to finance Hezbollah operations against Israel and against U.S. forces in Iraq.

As the Mossad director, Dagan helped to engineer the economic sanctions brought against Iran—sanctions that ultimately brought Tehran to the negotiations table. When Dagan left the Mossad in 2011 after eight years as director, he became an outspoken critic of Prime Minister Netanyahu’s desire to preemptively bomb Iran’s nuclear reactors, sincerely believing it could not be effectively carried out.

Meir Dagan vanquished virtually all the opponents he faced on the battlefield, but cancer proved to be an unbeatable foe. After a gallant fight, the disease ultimately took the soldier spy’s life. Dagan was remembered as one of the best, longest-serving and most dynamic Mossad commanders in Israel’s history. Harpoon, though, was his baby—and his legacy. When, in 2004, a Harpoon-led operation raided banks in the West Bank, President Bush expressed his outrage at the strike against the Palestinian economy, calling the Israeli action “Wild West.” Years later, however, Dagan’s “follow the money and destroy the money” playbook became the template used by the U.S. and its allies with great success in the battle against ISIS in Iraq and Syria.

Nitsana Darshan-Leitner is an Israeli activist and civil rights attorney. She is the president of Shurat HaDin, an Israeli law center based in Tel Aviv that has represented hundreds of terror victims in lawsuits around the world. She is the co-author of HARPOON: INSIDE THE COVERT WAR AGAINST TERRORISM’S MONEY MASTERS to be published on November 7, 2017, by Hachette Books. 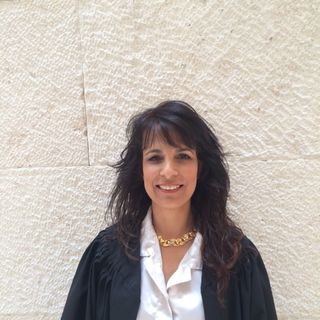 Nitsana Darshan-Leitner is an Israeli activist and civil rights attorney. She is the president of Shurat HaDin, an Israeli law center based in Tel Aviv that has represented hundreds of terror victims in lawsuits around the world. She is the co-author of HARPOON: INSIDE THE COVERT WAR AGAINST TERRORISM’S MONEY MASTERS to be published on November 7, 2017, by Hachette Books.
Read more by nitsanadarshanleitner
Tags: ISLAM ISRAEL TERRORISM HOMELAND SECURITY