It’s the black market blow-out that launched a thousand memes. You can expect even more meme-worthy trolling and much tsk-tsking at CNN and MSNBC after the White House spokeswoman, Kayleigh McEnany, put Nancy Pelosi’s video of her illegal hair appointment on a continuous loop as part of the White House briefing today.

Nancy Pelosi was not in the halls of congress when I asked where she was. She was not working in good faith to make a deal for the American people. Nope, Nancy Pelosi was found in San Francisco, at a hair salon, where she was indoors, even though salons in California are not [sic] only open for outdoor service. Apparently, the rules do not apply to Speaker Nancy Pelosi.

She wants small businesses to stay shut down, but only re-open for her convenience. Do as I say, not as I do, says Nancy Pelosi.

Just the News reports that there was a LOT wrong with Pelosi’s black market blow-out.

The city’s health-safety ordinances had kept San Francisco hair salons closed since March. However, some are allowed to reopen only for outdoor service – including haircuts but not shampoo and coloring treatments.

Pelosi, a California Democrat, appears from the video to have gotten a shampoo inside the salon.

At the briefing, McEnany kept up the pressure, calling Pelosi’s next move “skipping town to violate” COVID-19 rules.

Nancy Pelosi is holding up $1.3 trillion in relief for the American people, while getting special access to the very kind of small businesses that this money would support – businesses like this hair salon.

Before she skipped town to violate her state’s guidelines, Pelosi proposed a bill. It was called The Heroes Act, which contained no additional paycheck protection funding. This would help the very small business she has bizarrely accused of plotting against her.

She juxtaposed Pelosi’s actions with those of the president’s which, of course, she lauded.

The president sees through Democrats’ disregard for Americans in need and he took action, unilaterally, on his own accord. He provided relief from evictions. He provided unemployment insurance. He paused student loan payments. And he cut payroll tax, putting money in the American people’s pockets. 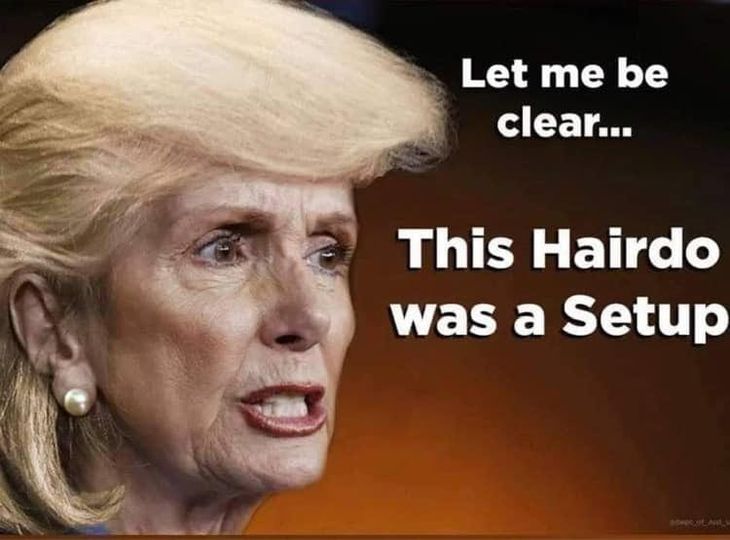 In a briefing with reporters after the black market blow-out, Pelosi said she’d been “set up” by the salon owner.

As it turns out, it was a set up, and I take responsibility for falling for a set up. I think that this salon owes me an apology, for setting me up.

Q: "I just spoke to a San Francisco barber who's a fan of yours… but he thinks you owe the service industry an apology."

Speaker Pelosi: "Well I don't. I think that this salon owes me an apology." https://t.co/YIKp2X56PN pic.twitter.com/HZ62gQyS9X

Oh yes, that’s what former D.C. Mayor Marion Barry, Democrat, claimed when he was caught doing cocaine with a woman.

Why does Pelosi's black market blow out "set me up" seem so, so familiar? https://t.co/8utiZn5P8e… pic.twitter.com/PtXuP9nk21

President Trump scolded Pelosi for not having one of her color-matched masks on.

Crazy Nancy Pelosi said she was “set up” by the beauty parlor owner when she improperly had the salon opened (and didn’t wear a MASK!). Does anyone want a Speaker of the House who can be so easily SET UP?

Crazy Nancy Pelosi said she was “set up” by the beauty parlor owner when she improperly had the salon opened (and didn’t wear a MASK!). Does anyone want a Speaker of the House who can be so easily SET UP?

Fox News’s Sean Hannity called it a Con-Spa-Racy. Good one.

The hilarious satire site The Babylon Bee suggested that the hair salon lured the speaker by promising her ridiculously expensive ice cream.

The salon owner has had her life threatened and hundreds of fake reviews have been put on her social media sites. Now, Pelosi has sicced her lawyer-daughter on her. Christine Pelosi, who’s usually a reliable ally to women, has circulated a letter in which the man who did Pelosi’s blow-out was himself set up by the salon owner.

She says there’s no way she set up the speaker.

It’s unclear when Pelosi will show back up to work, but when she does, we’re sure she’ll have nice hair.