Trump Campaign Ad Uses Antifa Symbol, But the Symbol Has a Disgusting Backstory...

On Thursday, Facebook removed a Trump campaign ad condemning the looting, vandalism, and arson across America that destroyed black lives, black livelihoods, and black monuments, because the Trump campaign displayed a symbol used to denote political prisoners in Adolf Hitler’s concentration camps. The campaign used the symbol to condemn antifa and other leftist militants, claiming the symbol represents antifa. Facebook said the symbol violated its “policy against organized hate.”

“Dangerous MOBS of far-left groups are running through our streets and causing absolute mayhem,” the ad began. “They are DESTROYING our cities and rioting — it’s absolute madness. It’s very important that EVERY American comes together at a time like this to send a united message that we will not stand for their radical actions any longer. We’re calling on YOU to make a public statement and add your name to stand with President Trump against ANTIFA.”

Schutzstaffel, the German Nazi soldiers who ran the concentration camps, sewed badges with that symbol onto the sleeves of political prisoners, including socialists, social democrats, communists, and anarchists. They also sewed that symbol on the sleeves of trade unionists, Freemasons, and people who tried to rescue Jews.

A Facebook spokesman told the Daily News that the platform scrubbed the ad due to the Nazi connection.

“We removed these posts and ads for violating our policy against organized hate,” the spokesman said. “Our policy prohibits using a banned hate group’s symbol to identify political prisoners without the context that condemns or discusses the symbol.”

Trump campaign spokesman Ken Farnaso claimed the campaign used the symbol because antifa uses it. “The red triangle is an Antifa symbol,” he told the Daily News, including links to online retail stores selling water bottles, t-shirts, posters, and other gadgets with the triangle on it. Those sites describe the triangle as “anti-fascist.”

“The inverted red triangle is a symbol used by Antifa, so it was included in an ad about Antifa,” Trump campaign Communications Director Tim Murtaugh insisted. “We would note that Facebook still has an inverted red triangle emoji in use, which looks exactly the same, so it’s curious that they would target only this ad.” 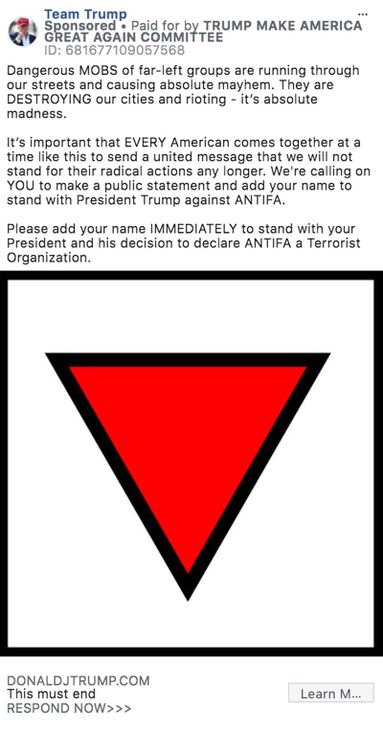 Jonathan Greenblatt, CEO of the Anti-Defamation League, slammed the ad as “offensive and deeply troubling.”

“It is not difficult for one to criticize their political opponent without using Nazi-era imagery,”
he argued. “We implore the Trump campaign to take greater caution and familiarize themselves with the historical context before doing so. Ignorance is not an excuse for appropriating hateful symbols.”

While I often condemn Big Tech censorship, this presented a difficult case for Facebook. The symbol’s history is troubling, but it also stands to reason that some antifa groups may use that symbol because of that history. The campaign should launch the same ad, featuring an image of the destruction from the riots rather than an obscure symbol with a troubling history.

MAP: See the Destruction the George Floyd Riots Wreaked All Over Minneapolis