In this episode, Tim Murtaugh, the Trump campaign’s director of communications, investigates “the misogynistic insult that creepy Joe Biden slung at a young female questioner during a bizarre campaign rally outburst.”

When it comes to a “lying dog-faced pony soldier,” “not even the liberal media understood who or what clueless Joe was talking about. So we sent detectives into the field, had sketch artists mock up images to match witness statements, but nothing conclusive came to fruition.” 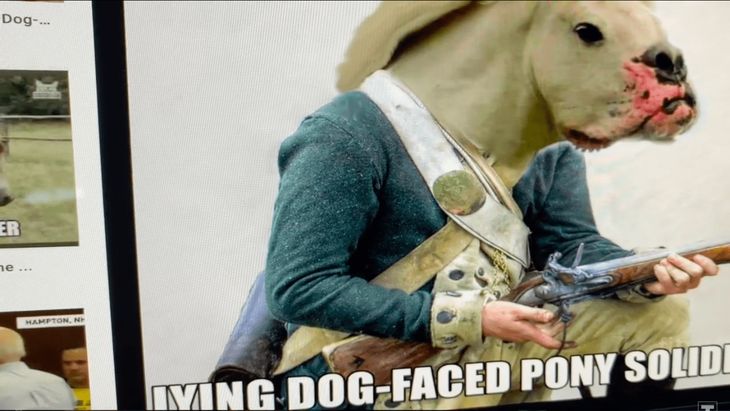 “The trail seemed to be running cold. But then Joe’s campaign insisted that the term comes from a classic cowboy movie,” Murtaugh narrated.

So the Trump campaign interviewed Mr. Bott Scaio, a film and television historian. While the Biden campaign claimed the “lying dog-faced pony soldier” quip came from a John Wayne movie, Scaio insisted that “this line was never uttered.”

“The reference may have been mouthed in a very, very, very old silent movie from the post-war era — the First World War,” he explains.

Murtaugh wondered whether Biden was truly making a pop culture reference from the 1920s, but rightly dismissed the idea.

“Then it dawned on our investigators: You can’t believe anything Joe Biden or his campaign say. With that truth established, here’s the fact — there is only one known person at least in recorded history, to use that phrase, and it’s the candidate himself who can’t remember where it came from,” Murtaugh concluded.

The video speculated about Biden’s own self-image while playing a clip from the Democrat insisting, “I’m not going nuts.”

While these videos are silly, humor can be an effective political tool. By mocking Joe Biden’s gaffes, the Trump campaign highlights them, while giving audiences a hearty laugh. A satirical investigative show is a perfect tool to mock the presumptive Democratic nominee.

When the Trump campaign released its first “Truth Over Facts” video in May, left-leaning journalists didn’t get the joke, apparently interpreting the mocking video as an “Orwellian” endorsement of “Truth Over Facts.” Who knows how they will respond to this latest hilarious installment?