If Biden Doesn't Understand the Rule of Law, How Can He Serve as Commander-in-Chief?

On Friday, presumptive Democratic nominee Joe Biden attacked President Donald Trump’s tweet condemning the looting and arson in Minneapolis. After calling for an FBI investigation into the tragic death of black man George Floyd following a police officer kneeling on his neck, Trump had condemned the riots as “dishonoring” Floyd’s memory, and supported law enforcement actions to stop the lawlessness. In a statement about the tragic death of black man George Floyd apparently at the hands of police officers, Biden attacked Trump’s tweet as “incendiary,” claiming it encouraged “violence.” In doing so, he echoed Twitter’s move in blocking the tweet for “glorifying violence.”

“This is no time for incendiary tweets. It’s no time to encourage violence. This is a national crisis and we need real leadership right now, leadership that will bring everyone to the table so we can take measures to root out systemic racism,” Biden said in a video statement.

Tune in as I address the unfolding situation in Minnesota and the killing of George Floyd: https://t.co/AKk14gGif5

Earlier on Friday, Biden had condemned Trump for “calling for violence against American citizens during a moment of pain for so many. I’m furious, and you should be too.”

I will not lift the President’s tweet. I will not give him that amplification. But he is calling for violence against American citizens during a moment of pain for so many. I’m furious, and you should be too.

So, what message from Trump drew so much ire from Biden and Twitter?

The platform took the unusual step of hiding the second tweet in a presidential statement on the riots in Minneapolis — riots that involved the looting of many stores and the burning of a police station, an Arby’s, an AutoZone, and low-income apartments.

“I can’t stand back & watch this happen to a great American City, Minneapolis. A total lack of leadership. Either the very weak Radical Left Mayor, Jacob Frey, get his act together and bring the City under control, or I will send in the National Guard & get the job done right,” the president tweeted. He then added another message, which Twitter decided to pseudo-censor. 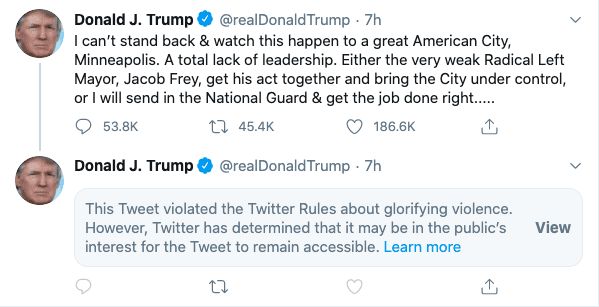 “These THUGS are dishonoring the memory of George Floyd, and I won’t let that happen. Just spoke to Governor Tim Walz and told him that the Military is with him all the way,” he tweeted. “Any difficulty and we will assume control but, when the looting starts, the shooting starts. Thank you!” 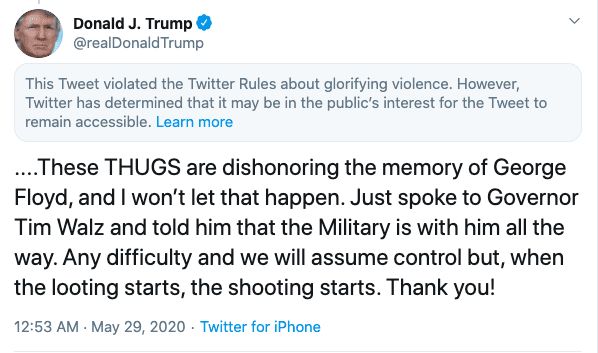 Sure, the president was vulgar — he’s Donald Trump, after all — but as his tweets go, this was far from his worst.

Furthermore, when looters and arsonists are stealing and destroying property, it is the government’s job to restore order. Trump’s decision to offer military support to end the looting was appropriate. As for those who say the president’s use of the term “thugs” was racist, what do they say about Obama’s use of the term to condemn Baltimore rioters in 2015?

Yet it seems Twitter and Biden were echoing the sentiment of Walter Shaub, former director of the Office of Government Ethics, who accused Trump of arguing that the army should “murder Americans on American soil.”

THE THUGS AT THE WHITE HOUSE ARE DISHONORING THE MEMORY OF AMERICAN SOLDIERS WHO DIED FOR FREEDOM BY TWEETING THAT THE ARMY SHOULD MURDER AMERICANS ON AMERICAN SOIL. https://t.co/bfpmgefUOn

When police or the armed forces quell riots that destroy property and endanger lives, they are not committing “murder.” Naturally, law enforcement should seek to prevent looting and rioting by peaceful means before resorting to violence. But restoring order and protecting property is one of the government’s fundamental roles.

Trump arguably should have issued a more measured statement, explaining that the National Guard would restore order at minimal risk to human life, protecting the rioters as much as possible while preventing them from doing further damage. If he sends in the military now, and if the armed forces shoot and kill even one looter or rioter, Black Lives Matter activists would likely seize on that lawless individual as a martyr.

Trump needs to be careful in these situations to make it clear that he does value human life as well as law and order — and clarifying that will likely require more than 240 characters.

Most importantly, Donald Trump appears to agree with Joe Biden that the death of George Floyd is likely an abuse of force — even potentially murder. Indeed, Floyd’s family has condemned the looting and the rioting, saying Floyd “would not want people to get hurt. He lived his life protecting people.”

Biden’s attack on Trump is likely just another attempt to suggest the president is racist. Biden is apparently trying to erase the memory of his horrific “You ain’t black” remarks. Earlier this week, he published an op-ed slamming Trump as racist for the president’s use of the term “Chinese virus.”

Trump was not unduly “calling for violence against Americans.” He was offering to send in the armed forces to end the lawless looting and violence. If Joe Biden cannot see the difference between those two things, how can he be trusted to serve as America’s commander in chief?