Will Coronavirus Hurt Trump in November? New Poll Shows How Voters Are Shifting

The coronavirus pandemic threatens the lives of thousands of Americans and has cost millions of Americans their jobs. How does this translate to how voters make their decision in November? New research from the Cultural Research Center at Arizona State University provides some early answers.

The center asked Americans to rank the four most important issues to them, personally, in two surveys in February and April. This two-month window, which covers the span of the major impact of the coronavirus pandemic, showed significant shifts away from some issues and toward the issue of health care in particular.

“In relation to the election, the post-pandemic world will require particular skills in our president. Potential voters are indicating that first and foremost they want a leader who will restore the economy to strength and address our healthcare needs,” George Barna, a veteran public opinion researcher and professor at ASU, explained in a report cataloging his findings.

In the surveys — which polled 1,000 Americans at or above age 18 — “More than half of adults named some type of economic concern, such as economic growth and stability, taxes, unemployment, entitlement programs, and government spending. Given what has happened to both the national economy and to household finances, prioritizing those matters is not surprising.”

“Issues related to overseas activity – such as foreign policy, the military, national security, terrorism, and national defense – were among those most hard-hit by the effects of the virus,” Barna said. “Peoples’ focus has turned homeward. Domestic policy and performance transcend global concerns at the moment. The research strongly suggests that we should expect the November election to emphasize domestic policy platforms as people wrestle with personal finances, jobs, and the new ways of life that will define the post-pandemic United States.”

Health insurance and health care, already the top issue in February at 37 percent, rose to a top-four issue for 42 percent of Americans in the April survey. Two types of economic concern: “growth and stability” and “jobs, unemployment” remained high, with jobs rising from 21 percent to 26 percent. While many issues remained constant, Americans grew colder about immigration (from 20 percent down to 16 percent), national defense (19 percent down to 16 percent), and gun policy (from 18 percent to 13 percent).

The poll did not explain whether voters support or oppose Trump, how they lean on Medicare for All, Joe Biden’s public option plan, or Trump’s plan to scrap Obamacare but keep coverage for pre-existing conditions.

Read more about the research here. 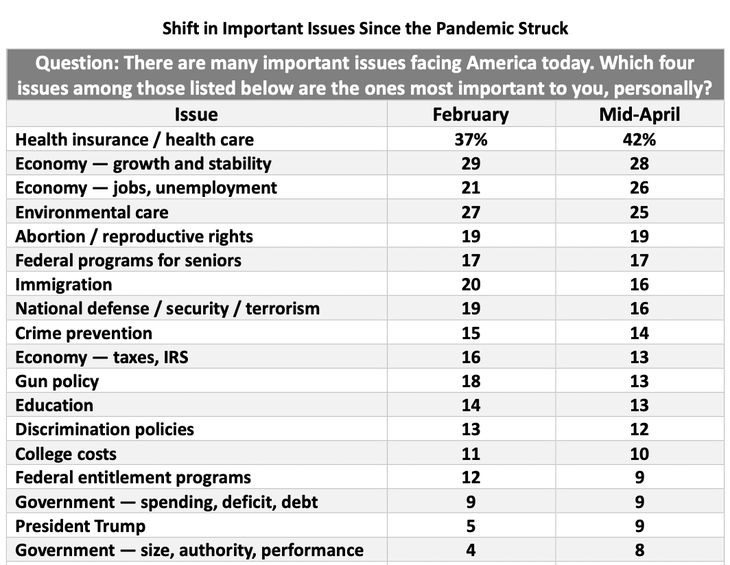