The GOP has released an ad taking a direct and visual shot at the recent chaos and Democrat leaders pushing for radical change. It separates the legitimate concerns and peaceful protests in response to the death of George Floyd with the ongoing madness and destruction being perpetrated by the far left.

This ad should run on every major network and technology platform as often as possible for as long as these radicals continue to destroy and deface our cities and monuments. Watch:

Short and to the point, it could inspire the majority of Americans who do not follow politics as carefully in advance of significant elections to do a little homework, especially in regards to the political goals of Black Lives Matter and where the money donated to the organization goes.

Public scrutiny is necessary because we have an organization whose name is a sentiment that is agreed to by 99.9% of people. Those who aren’t paying attention are not aware of the questions surrounding the group because the corporate media will not challenge their premise or their policy positions in any significant way.

Americans Are on Board

Yet most Americans don’t agree with the only significant policy position of the group Black Lives Matter. In a recent Harvard Harris poll, 60% of Americans have a favorable view of the police. The only institutions that score higher are the CDC and the military.

Further, among registered voters, defunding police departments is a minority position. Defunding the police is the only petition on the website for the political organization Black Lives Matter: 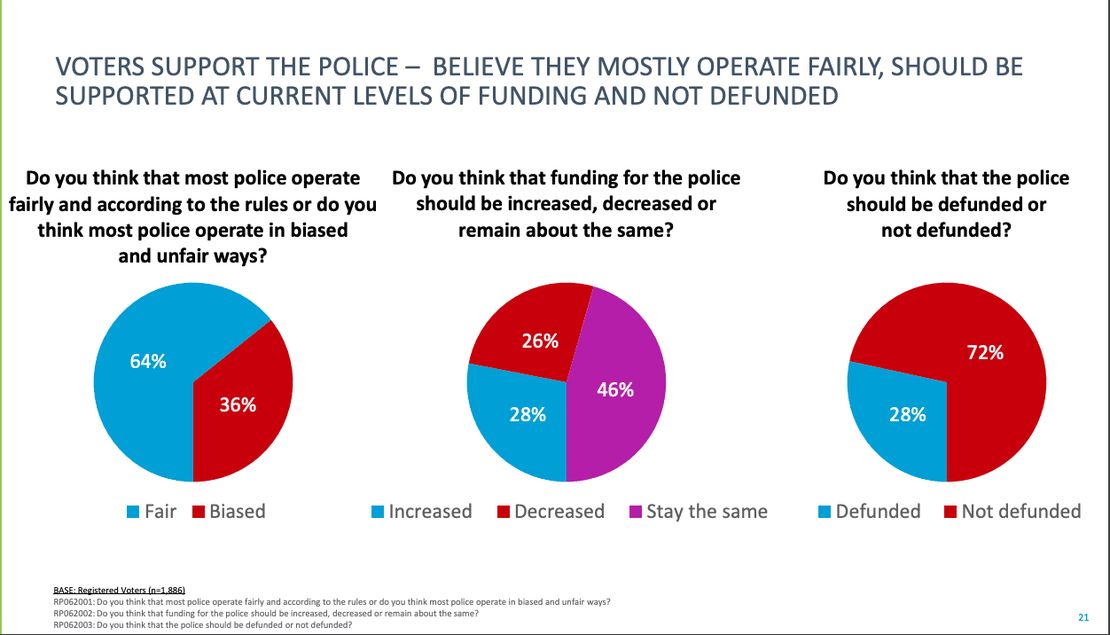 These same registered voters also blame the protestors for the riots and think the response has been too soft: 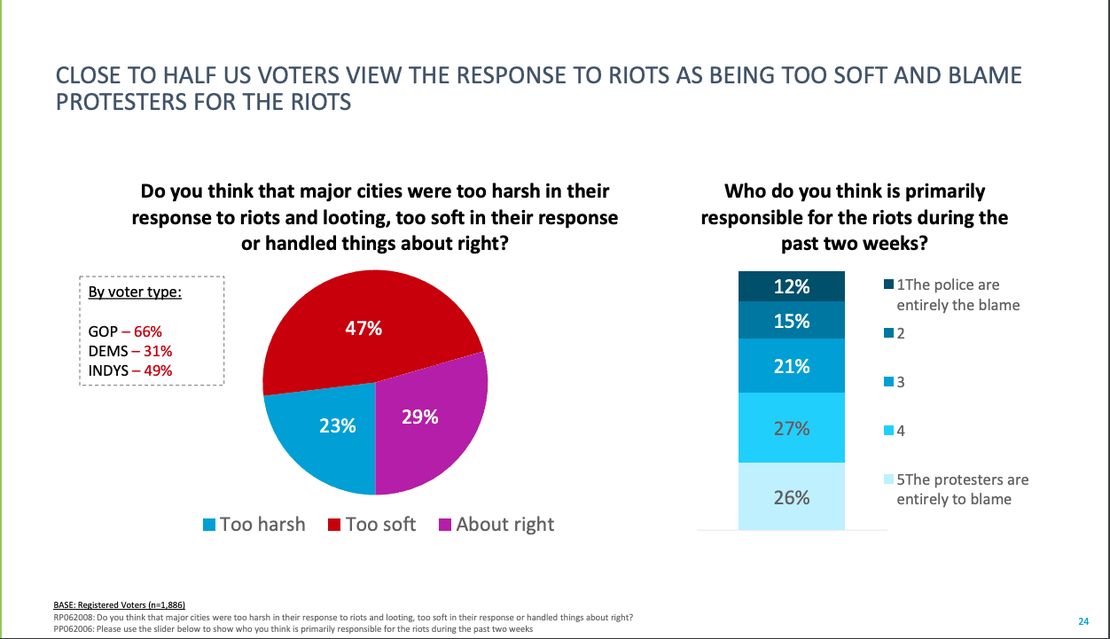 Majorities also agree with the use of the National Guard and the military to control Washington D.C. and to establish order where local authorities fail to do so: 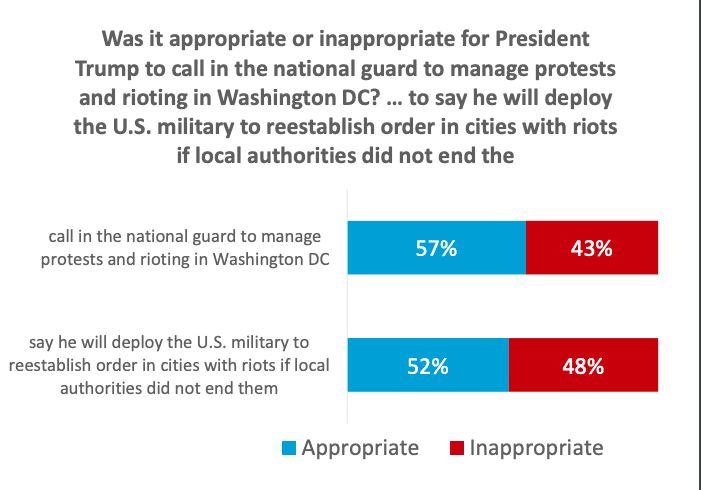 A full 65% think the protestors should be removed from the Seattle autonomous zone.

The poll also shows that registered voters are overwhelmingly opposed to several actions that fall into the realm of cancel culture. Regarding the removal of television shows that depict law enforcement and the jobs they do, 65% oppose deletion, and 77% oppose HBO removing “Gone with the Wind.”

Destruction of monuments is also very unpopular. A full 58% think statues of confederate figures should remain, and 72% want local governments to stop rioters from destroying them. The survey did not even ask about the current trend of destroying the statues of abolitionists, founders, and other historical figures.

This ad addresses those issues where registered voters agree with the administration and GOP politicians on several issues. The clip of Biden talking about fundamental transformation is a particularly useful hit.

Future GOP ads need to be directed at what appears to be some degree of cognitive dissonance in the poll. Despite having favorable views of police officers and not supporting sweeping police reform, 58% agree with the statement that America is systemically racist.

The idea of systemic racism needs to be flipped to systemic denial of opportunity because of Democrat policies. School choice is an apparent item where Joe Biden is on record rejecting the policy. The Trump administration is on record supporting these policies from day 1.

Another item the administration may want to consider is an expansion of Opportunity Zone policies to encourage industry and retailers to return to communities where riots and looting were pervasive. In the past, this behavior has chased businesses out for decades. Offer solutions for a quick return to normal operations in these areas. President Trump has the economic advisors to figure this out.

The simple fact is, President Trump’s economy included more people from more backgrounds in its success than any president in history. The campaign needs to make the case they can do it again with concrete proposals and talk about the expansion of opportunities in education and investment.

The only systemic exclusion at this point is the fact a child’s zip code determines their education. Democrats insist this system continues as is due to pressure from the largest teachers’ unions. The GOP must make them pay for that position.

Highlighting the lack of financial transparency of Black Lives Matter may also reverse the support among registered voters for corporations funding it. Glenn Beck did a shocking report with receipts on BlazeTV* showing a fraction of the funds donated got to the organization last year. This gap is because it moves through two dark money groups, ActBlue and Thousand Currents, who each appear to take a cut a substantial cut.

Once Black Lives Matter receives the money, only 6% went to local chapters for infrastructure improvements in minority communities. From 2017 to 2019, 80% was spent on salaries, consulting, and travel. This imbalance is wildly out of line with Charity Navigator’s requirements for acceptable administrative expenses. Black Lives Matters also uses Thousand Currents status as a charity to collect donations. Many don’t know BLM is not itself a charity under the IRS code.

The GOP’s Next Challenge

Combining the shady finances with the explicitly Marxist goals is a message someone besides conservative media and right-leaning commentators needs to have the courage to expose.

This ad is an excellent compilation by the GOP to counter the current chaos created by the Democrats foot soldiers on the radical left. This kind of pressure must continue to be brought to bear in every other ad the GOP puts out on a national level. 2020 is going to take significant amounts of intestinal fortitude to speak the truth. More GOP leaders need to up their game and do it.

*Author’s note: Glenn Beck’s special “CENSORED: Million Dollar QUestions for Black Lives Matter” is behind the paywall on BlazeTV and cannot be linked in the article.