Since Joe Biden told “Breakfast Club” host Charlamagne tha God that if he didn’t know who he would be voting for between Joe Biden and President Donald then he wasn’t black, he has faced quite a bit of backlash. Senator Tim Scott (R-S.C.) asserted that Biden’s comment made it clear that the presumptive Democrat nominee takes the black vote for granted.

He went on to say Biden has always shown a lack of sensitivity in discussions about race and he slammed the left for not calling Biden out on his latest commentary. He contrasted this with conversations he has had with President Donald Trump that have resulted in actual policies and programs like Opportunity Zones and funding for Historically Black Colleges and Universities (HBCUs).

“VP Biden’s statement today represents the, arrogant and out-of-touch attitude of a paternalistic white candidate who has the audacity to tell black people, the descendants of slaves, that they are not black unless they vote for him. This proves unequivocally that the Democratic nominee believes that black people owe him their vote without question; even though we as black people know it is exactly the opposite. He should spend the rest of his campaign apologizing to every black person he meets.”

Even Charlamagne got in on the commentary, reinforcing that he was looking for specific answers from Biden on his legislative record and policy proposals:

WATCH: Charlamagne Tha God says Joe Biden "was really one of the people on the frontline when it came to … mass incarceration" of Black Americans. pic.twitter.com/9k98YD3WJg

As Senator Scott noted, Biden has a history of making comments regarding race that are awkward at best, offensive at worst. Referring to his running mate Barack Obama in 2007, Biden said:

“I mean, you got the first mainstream African-American who is articulate and bright and clean and a nice-looking guy. I mean, that’s a storybook, man.”

This election cycle has had its own race-related gaffes. In relaying a story about someone named Corn Pop, Biden affected an insulting accent. He called Corn Pop a ‘bad dude’ and talked about pomade. In the same remarks he used the term roaches which can be seen as a racial slur. It is not clear how he was using the term, but people questioned it.

In talking about education and the need to challenge students, Biden said, “poor kids are just as bright and talented as white kids.” He quickly tried to recover by adding, “Asian kids, rich kids, and black kids,” but the initial comment still stuck out.

Am I going to call Joe Biden a racist? No, I can’t know what is in another person’s heart. What I will say is his running commentary — to include “you ain’t black” — is condescending and inauthentic. In this, he is really just like many liberals. A study from Yale noted that liberals portray themselves as less competent when they speak to black audiences.

According to new research by Cydney Dupree, assistant professor of organizational behavior at Yale SOM, white liberals tend to downplay their own verbal competence in exchanges with racial minorities, compared to how other white Americans act in such exchanges. The study is scheduled for publication in the Journal of Personality and Social Psychology.

The Trump campaign is capitalizing on this gaffe. According to Politico, it is spending $1 million on a digital ad campaign. One ad focuses on Biden’s comment using Kamala Harris’ words from a past debate and the other focuses on his history on championing punitive crime bills.

The Trump campaign is aggressively courting minority voters with several affinity groups. Black Voices for Trump has been all over this latest gaffe, promoting web events and highlighting videos from black Trump supporters. They have even started to push merchandise with the quote.

As Senator Scott noted, the left is not taking Biden to task for his comment. In fact, there are even some odd defenses of it. Many of them echo 1619 Project author Nikole Hannah Jones: 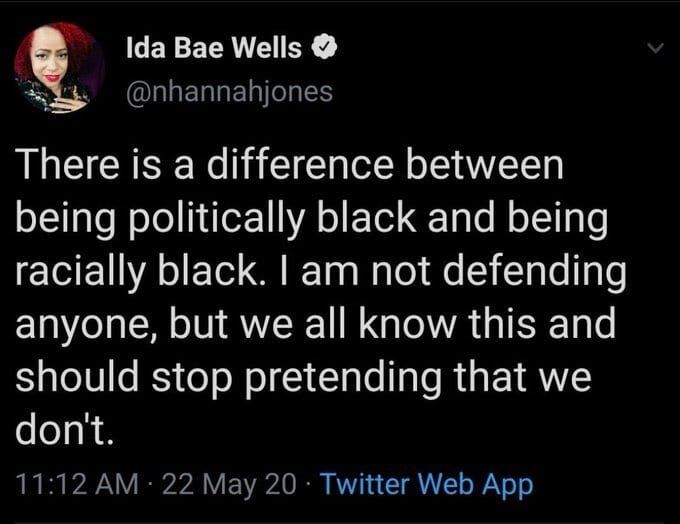 No, we all don’t know it. What Joe Biden knows is that he cannot lose too many black voters, or he has no path to victory. And rather than try to convince blacks to vote for him with polices and solid arguments, he just takes them for granted. In the absence of backlash, Biden actually believes what he said. Using debunked stories about President Trump’s comments about s-hole countries and Charlottesville protestors, he tries to excuse his own elitist attitude.

I am not sure it is going to work this time. This may be the gaffe that sinks him with black voters who do not appreciate being viewed as a monolithic block, any more than many women, gay people, or Hispanics do. If the outcome of pandemic politics is the death of identity politics, it will put at least one item in the win column.

Wait. Did Twitter Just Get a Head Start on Throwing Joe Biden’s Racist Comments Down the Memory Hole?