With recounts and legal battles on the horizon, many still believe that President Trump will emerge victorious in the 2020 presidential election. The media, ignoring these pending battles, decided to crown Joe Biden the victor anyway, putting massive pressure on Trump’s team to fall in line—despite alleged fraud in various states.

Of course, anyone who dares challenge the media narrative that Joe Biden was elected president is being branded a sore loser. The Trump campaign has signed affidavits of witnesses to voter fraud, yet the media is telling us to ignore this.

Is it being a sore a loser to ensure that the results of the election were legitimate? Is exposing voter fraud so terrible?

Enough is enough. When we have plenty of evidence that there was systemic fraud, we have to get to the bottom of it. If Joe Biden is so confident he won legitimately, he’d be calling for audits too.

The truth is, it’s not Trump supporters who are sore losers. They just want to have faith the results were legitimate.

If you really want to find the sore losers, just look back to 2016.

After Trump won the 2016 election, a Change.org petition called on “conscientious electors” to “protect the Constitution from Donald Trump, and to support the national popular vote winner.”

“Donald Trump has not been elected president,” the petition read. “The real election takes place December 19, when the 538 Electoral College Electors cast their ballots – for anyone they want. If they all vote the way their states voted, Donald Trump will win,” the petition noted. “However, in 14 of the states in Trump’s column, they can vote for Hillary Clinton without any legal penalty if they choose.”

This wasn’t just some random petition with a few measly people signing onto it. A whopping 4,893,520 people signed this petition. 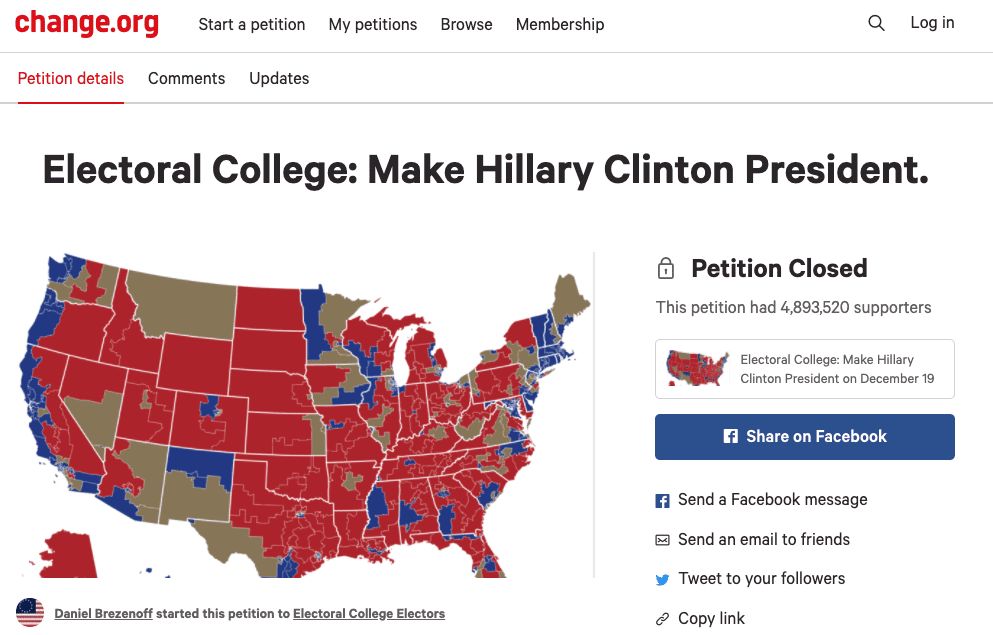 But, Trump supporters are the “sore losers”? Trump voters aren’t calling on faithless electors to change the result. They want to expose the fraud. Shouldn’t we all want to know that the election was fair and legal?

In 2016, Hillary supporters wanted the Electoral College to overturn the rightful result of the election. When that didn’t happen, they immediately latched on to the Russia collusion hoax to delegitimize Trump’s presidency. In 2020, evidence of fraud that could potentially have altered the results of the election is just too much to ignore.

The Trump campaign will do what it takes to expose the fraud. When we can be confident that the election results were legitimate we can see who the real winner is. But nothing will change the fact of who the real sore losers were: the millions of Hillary voters who wanted to coerce the Electoral College electors to overturn the results of the 2016 election.