Delay The Presidential Election? It's Better Than Mail-In Voting

Before going further, it should be noted that no president has the authority to postpone an election. Doing so would take an act of Congress, and it seems unlikely that Congress would ever agree to such a thing—especially right now. For starters, Democrats are looking at the pandemic as a means to implement nationwide mail-in voting, which would be a total disaster. Even if they believed it to be politically advantageous to them, Democrats already have a laundry list of election goals they’d sooner implement than delaying an election. In fact, Nancy Pelosi already tried to overhaul our elections in the coronavirus stimulus package, which contained provisions to nationalize same-day registration, mandate the counting of provisional ballots nationwide, and nationalize ballot harvesting—three Democrat goals designed to help them steal elections.

Recent polls have even suggested that support for mail-in voting is on the rise because of the coronavirus. A recent poll from Zogby shows that 6 in 10 Americans would favor a delay in the election if the virus situation gets worse. 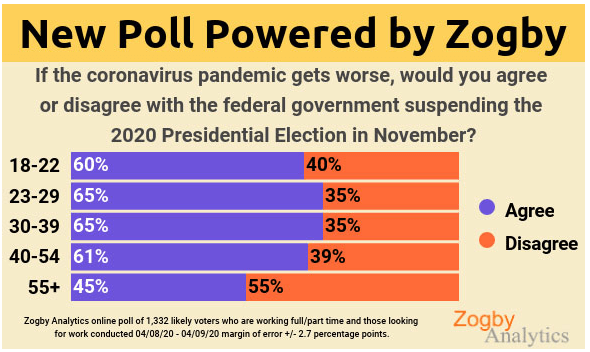 I’m quite shocked that the numbers are that high, especially for Democrats. A majority of Democrats at least somewhat agreed with delaying the election? Who would have thought? If we assume that delaying the election is even a possibility, it would certainly be preferable to mail-in voting. As Hans von Spakovsky of the Heritage Foundation noted, “Absentee ballots are the tools of choice of election fraudsters because they are voted outside the supervision of election officials, making it easier to steal, forge, or alter them, as well as to intimidate voters.”

“Going entirely to by-mail elections would unwisely endanger the security and integrity of the election process,” he added. “Particularly if officials automatically mail absentee ballots to all registered voters without a signed, authenticated request from each voter.”

If the situation for the coronavirus doesn’t improve before the November election, I would sooner support a delay in the election than any effort to nationalize mail-in voting. If it happens once, it will become the norm for all future elections.  I would rather risk infection than allow nationwide mail-in voting.

In New York state, where I live, Governor Cuomo has already mandated that absentee ballots will be sent to all voters. Assuming there will still be a choice, I will not vote via absentee ballot. I will go to my polling place and vote. We can’t risk increasing the opportunity of fraud by having everyone vote by mail-in ballot.  Anyone who believes in maintaining the integrity of our elections should do the same.

Matt Margolis is the author of Trumping Obama: How President Trump Saved Us From Barack Obama’s Legacy and the bestselling book The Worst President in History: The Legacy of Barack Obama. You can follow Matt on Twitter @MattMargolis