A language-learning and research platform has analyzed the Twitter accounts of Donald Trump and Joe Biden and found that Trump’s vocabulary is 17.6% larger than Joe Biden’s. In addition, Republicans have, on average, a 14% higher vocabulary than those of their Democrat counterparts.

The company, Lingo Ninja, analyzed the tweets of the top 100 American political accounts. In a statement, the founder of Lingo Ninja, Daniel Wueringer, said:

It’s important to note that the analysis only examines the quantity of the vocabulary size. It does not distinguish between the word quality and sophistication. There are multiple possible reasons for differences in vocabulary size including age, education, range of topics and intentional use of simpler or more complicated language. Those reasons are outside the scope of this analysis.

Lingo Ninja also found that Republicans use an average of 4,630 words, while Democrats use an average of 4,060 words, a statistically significant difference. “Republicans dominate the higher end of the spectrum, while Democrats are more dominant on the lower end,” said Wueringer. “@SarahPalinUSA has the largest vocabulary of all the politicians we studied. @HouseDemocrats has the smallest.”

Wueringer said they decided to conduct the study to figure out the most important words for language learners to understand, and the best strategies for learning. Analyzing the tweets of famous people was more fun, he said.

In an article on their website, Lingo Ninja described their methodology:

We recently released an article series based on a vocabulary analysis of Twitter accounts. Our goal was to identify the most important words for language learners and the most effective language learning strategies. This new series focused on analyzing Donald Trump’s tweets, since it’s more fun to read about someone famous. In our latest article we compared the vocabularies of Donald Trump, Joe Biden and Kim Kardashian. A surprising outcome (for us) was that Trump’s vocabulary on Twitter is larger than Biden’s. But wait—doesn’t Donald Trump have the reputation of a small vocabulary?

To test our own analysis, we doubled down and expanded our sample from Trump, Biden, and Kim Kardashian to now include the top 100 US political accounts on Twitter. To identify the accounts for analysis, we used the ranking from Socialbakers, a marketing agency that tracks the largest social media data set in the industry.

They note that they never intended the study as a political analysis. They simply started with Trump due to his massive following and fame. 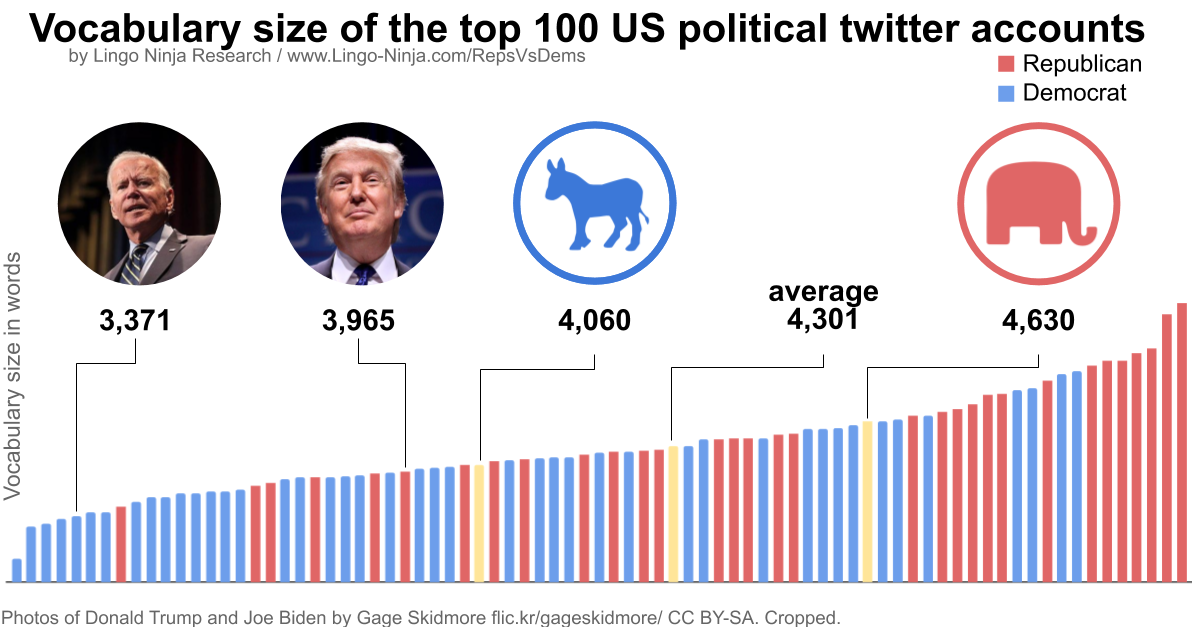 And yes, that giant red bar on the right represents none other than Sarah Palin, with a whopping 6,213 words used. By contrast, the House Democrats used fewer than half that number, at 2,809 (the teeny, tiny blue bar on the left).

Here’s the full list of the accounts they analyzed. Note that Kellyanne Conway came in second, which can be confirmed by watching any of her press briefings. The top seven, and eight of the top ten, are all Republicans.

The analysis is a fun way to debunk the trope advanced by coastal elites that the GOP is made up of bumpkins, rubes, and people who just don’t get it.

Jeff Reynolds is the author of the book, “Behind the Curtain: Inside the Network of Progressive Billionaires and Their Campaign to Undermine Democracy,” available at www.WhoOwnsTheDems.com. Jeff hosts a podcast at anchor.fm/BehindTheCurtain. You can follow him on Twitter @ChargerJeff, and on Parler at @RealJeffReynolds.

Guess What Happens if You Search for ‘Racist’ People on Twitter…