Beware: The Woke Mob Is Targeting You Next, Small-Town America

Woke mobs are coming for you if you are an elected official with conservative values. In cities and towns all across America, organized and well-funded protest groups have begun attacking city councilors, mayors, county commissioners, and members of school boards. It’s not just the big cities. Increasingly, small towns have faced similar harassment. The woke mob has targeted local elected officials for the sin of not being sufficiently woke. Its goal appears to be to intimidate conservatives from getting involved at any level of government. It also appears that the mob efforts are expanding faster than anyone realizes.

Here in Oregon, the small, rural, conservative-leaning towns of Estacada and Mollala have recently seen elected officials threatened with recall. In Oregon City, a medium-sized city south of Portland, a protest group has organized a recall against the mayor. The suburb of Gresham saw resignations from its mayor, city manager, and chief of police. And in Salem, the state’s capital, several school board members have been targeted for destruction.

This trend is growing and expanding and it appears to be the work of well-funded progressive groups on the local level with ties to large national non-profits pushing a radical agenda.

In Estacada, Mayor Sean Drinkwine was forced to apologize after he posted in a Facebook group, “I would not and have not condoned these BLM Vigils in our community. All city staff and I are working tirelessly to shut these Vigils down … Our number one concern is to keep our city safe and free from conflict.”

Disagreeing with the Marxist goals of BLM and opposing looting and violence will get you in trouble no matter how small your town is.

Dan Holladay, the Mayor of Oregon City, is now facing recall for attempting to cite, perhaps clumsily, accurate statistics about the number of African Americans shot by police across America:

Holladay has faced backlash after writing on Nextdoor that a small number of Black people were killed by police, though he gave no timeframe, and that, in some cases, the officers were being prosecuted for their actions.

“That is hardly an epidemic,” he wrote in the since-deleted post.

His comments came amid ongoing protests after the death of George Floyd, a Black man who died in Minneapolis in late May after a police officer kneeled on his neck for nearly nine minutes.

Holladay was also criticized for a post asking how there could be “protests, riots, looting and vandalism” in Portland, but the state wouldn’t sanction Fourth of July fireworks shows in some of Oregon’s smaller communities.

In a statement to the commission, Holladay condemned the Minneapolis police officers but defended his posts. He also seemed to equate anger over his posts with an endorsement of the destructive behavior that has accompanied some of the mostly peaceful protests in larger cities.

In Gresham, long-time Republican Mayor Shane Bemis became the third high-ranking city official to submit his resignation in the period of a week, after a conflict over promoting a person of color to the position of city manager:

Bemis’ resignation comes within days of both the police chief and city manager leaving their respective jobs. Since Thursday, city manager Erik Kvarsten and Police Chief Robin Sells have stepped down. Both said they were retiring.

The resignations come during a time in which allegations of racism within city government have surfaced. Deputy city manager Corey Falls, a black man, sent an internal letter to city leadership that called out racism and lack of support for him and other employees of color.

“My reception into the city of Gresham has been at best dismal,” Falls wrote. “It was very clear to me that those in (leadership) were not going to accept or support a black man in a leadership position.”

Sells sent an email Sunday to city officials saying she’d been pushed out of her job because Falls accused her of racism.

According to The Oregonian, which obtained Sells’ letter through a public records request, Sells said her family gave her a gnome statue as a present when she started as chief. Some officers took the statue and posted it in different locations as a prank. While the statue was still missing, Sells wrote that she told a crowd at an awards banquet, “it’s time to return my gnome, as gnome lives matter also.” Sells wrote that Falls called the remark racist.

The instance in the Salem-Keizer School Board is the most brazen so far.

At a meeting of the board on Tuesday night, the issue of Safety Resource Officers (SROs) in schools came up, after discussions at previous meetings. Having police in schools has become a hot-button issue, with the woke mob believing that removing cops makes schools less violent. Portland Public Schools and several other local districts have already removed SROs in the wake of the George Floyd murder while in the custody of the Minneapolis Police.

The Woke Beast Cannot Be Appeased

Keep in mind, in Tuesday’s meeting, the board only had a budget vote on its agenda. The question of SROs was to be taken up at a later date.

Nevertheless, during public testimony, several community members read off scripts to call Board Chair Marty Heyen a white supremacist for supporting SROs, and to say that they felt uncomfortable going back to school if she remained in her position. They repeatedly demanded that the board “divest” funds from cops and the “school-to-prison pipeline,” and invest more in education.

Superintendent Christy Perry blasted the seven members of the school board in the process:

Christy Perry, the superintendent of the Salem-Keizer School District, unloaded on the 7-member school board over their racist actions and inactions because she “cannot sit quietly any longer.”

Perry, who in a lengthy statement described herself “as a cis gendered white female” who acknowledges “that I have all kinds of privilege,” took the entire school board to task.

“We have provided opportunities to help understand our own biases,” she said in the statement. “Our board members barely engage in the training. We have instances of social media display of white supremacy, a black face mask and mockery over that mask. All actions I can’t defend.”

The black face mask was worn during a 97-minute school board meeting via Zoom on March 30, 2020. In that meeting, board member Paul Kyllo holds up a black face mask for nearly the entire time. When he put the mask down, Kyllo is seen with black face from his nose down through his neck.

The astute reader, at this point, will note that media accounts say the board member wore blackface when no such thing occurred. He happens to be a fan of the Portland Trailblazers NBA team. Calling that blackface is a stretch Gumby couldn’t accomplish. It’s obvious to anyone that he’s not being racially insensitive, he’s protesting the unsecured nature of a virtual board meeting. The woke mob will hear none of it.

During her remarks (around the 27-minute mark), Superintendent Perry lists several of the groups responsible for the action against members of the school board. Perry calls them out for showing leadership in the conversations about racism, and thanks them. The groups include:

At the 1:05:45 mark, the agenda allowed for public comment time. Two members of the public made statements attacking Chair Heyen for supposed white supremacy. A member of the woke mob, Raul Marquez Guerrero, ran unsuccessfully against Heyen in the 2019 election. He demanded that the board “divest” funds from the cops and reinvest those funds into education. He called for Heyen and Kyllo to resign from the board, saying that Heyen had ties to “white supremacist and anti-immigrant hate groups.”

After the meeting, the woke mob attacked another board member, Satya Chandragiri, on social media. Chandragiri, an immigrant from India and a child psychologist, apparently amounts to no more than a token person of color to the woke mob. 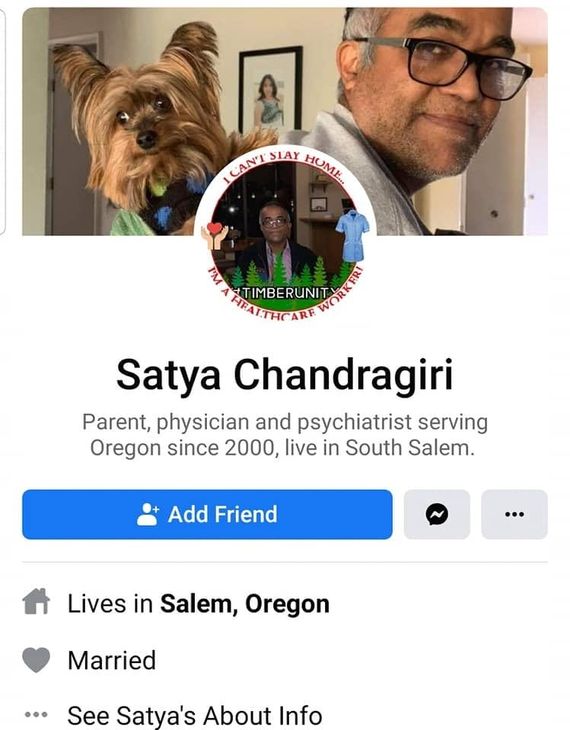 Then, out of the blue, an article showed up at Vice this morning recounting all of the supposedly racist things done by the Salem-Keizer School Board. Ironically, perhaps, the board member who caught the original ire of the woke mob is a Democrat (a fact that Vice conveniently left off, while being certain to list the Republican registrations of the other two board members in its crosshairs). They laud the student activist groups while excoriating the accused white supremacists on the board. Several students read off scripts evidently provided to them by activist groups, according to the Vice article:

To the dismay of local activists, the school board voted Tuesday evening in favor of continuing to fund police in local schools—a common policy nationwide, which civil rights organizations firmly say unequally targets students of color.

“By not calling for the resignation of Director Kyllo and Director Heyen, the board placed more importance on protecting white fragility than the safety of students of color. Shame on all of you.”

Vice then drops the SPLC bomb by noting that Heyen’s husband belongs to a “hate group”:

According to an official bio on an Oregon GOP website, Heyen’s husband Jeff is “involved with” the III% militia, which is considered a far-right anti-government militia movement by the Southern Poverty Law Center, a racism watchdog based in Montgomery, Alabama.

The level of coordination in these attacks by the woke mob at the local level, up to and including a national smear campaign, indicates an escalation of the witch trial tactics. These activists don’t want dialogue. They wish only to shame and intimidate people out of office if they don’t toe the woke mob line and support all aspects of the social justice movement. These mobs have been common in large cities. Now, conservative small-town America, they’re coming for you, too.

Jeff Reynolds is the author of the book, “Behind the Curtain: Inside the Network of Progressive Billionaires and Their Campaign to Undermine Democracy,” available at www.WhoOwnsTheDems.com. Jeff hosts a podcast at anchor.fm/BehindTheCurtain. You can follow him on Twitter @ChargerJeff.