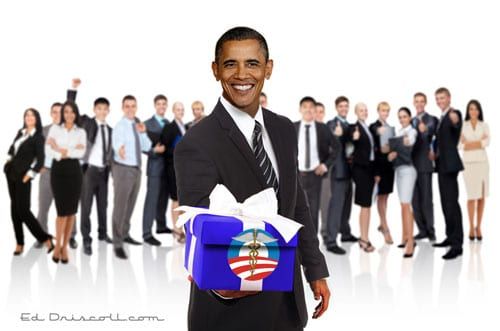 As the economy’s slowdown has become more visible, retailers have become increasingly nervous about this year’s Christmas shopping season. Obamacare may soon push them into a full panic.

Signs of nervousness abound. On October 3, the National Retail Federation announced that it expects “sales in the months of November and December to marginally increase 3.9 percent” over last year, slightly above the past decade’s average. But on October 16, its consumer spending survey came back saying that “the average holiday shopper will spend $737.95 on gifts, décor, greeting cards and more, two percent less than the $752.24 they actually spent last year.”

That either means that Americans are going to make up for what they don’t spend on gifts with more everyday purchases, or that there was a serious two-week decay in prospects for the final two months of the year. I’d say the odds are with the latter.

In Greater Cincinnati, stores were already aggressively selling Christmas decorations and knick-knacks in early October. Nationally, Christmas-themed TV ads were on the air almost a week before Halloween. Furiously chasing after their pieces of a stagnant pie, both Macy’s and JC Penney announced that they will open on Thanksgiving evening for reportedly the first time in their respective histories.

The post-shutdown economic data trickling out of Washington reinforces retailers’ anxiousness. September’s retail sales, announced on October 29, were “unimpressive.” Acting as if every American’s mood hangs on the back-and-forth in Washington, the press blamed the 17 percent government shutdown, even though it hadn’t even begun, and even though very few Americans paid much attention to it until it was almost two weeks old. Sorry, guys. As was the case with the government’s jobs report released a week earlier, September’s sales were weak because the economy was already weak, and getting weaker.

ADP’s National Employment Report released on October 30 gave us an idea of how much weaker. It told us that the private sector added only 130,000 seasonally adjusted jobs in October — less than half as many as in February. It was the fourth consecutive declining result. September and August were both revised sharply downward.

Mark Zandi, the ADP report’s chief economist, said in the report’s conference call that “the government shutdown and debt limit brinkmanship hurt the already softening job market,” though he at least had the integrity to say “there’s no proof positive” to support his assertion. The Associated Press, aka the Administration’s Press, predictably failed to include Zandi’s qualifier. Anyone insisting on exercising the shutdown excuse should have to acknowledge that Senate Majority Leader Harry Reid and President Obama could have prevented or ended it by respectively passing and signing House bills which would have kept the government running. But they didn’t.

The main problem isn’t the mind-boggling incompetence in the rollout of HealthCare.gov, or the hysterical blame shifting in which the left has engaged since this “Big Dig” of IT failures debuted. In fact, HealthCare.gov’s failure has thus far softened, but will not prevent, Obamacare’s potentially crushing economic blow.

That blow will come from the millions of Americans in the individual insurance market who have learned or will shortly learn that they will have a lot less discretionary income to spend next year. That’s because Obama’s contemptuous promise that they could keep their “Acme Insurance … a high deductible catastrophic plan,” and that they “would not be required to get the better one,” was a lie. That broken promise went beyond his now well-known “if you like your plan, you can keep your plan” fiction. It specifically said, “We don’t like those plans, because we think they’re inadequate, but you can keep them anyway.”

Earlier drafts of the legislation, as Investor’s Business Daily controversially but accurately observed in July 2009, had “a provision making individual private medical insurance illegal.” It would have accomplished this by terminating any plan once it made any change whatsoever to items covered, deductibles, or copays. Perhaps in response to the firestorm IBD and others raised, that prohibitive language was not in the final bill, replaced by comforting but deceptive language about “No Changes to Existing Coverage” and “grandfathered health plans.”

In July 2010, mere months after the ink dried on the Affordable Care Act, HHS Secretary Kathleen Sebelius deliberately regulated most pre-Obamacare individual plans out of existence.

… the Department of Health and Human Services then wrote regulations that narrowed that (grandfathering) provision, by saying that if any part of a policy was significantly changed since that date — the deductible, co-pay, or benefits, for example — the policy would not be grandfathered.

… the administration knew that more than 40 to 67 percent of those in the individual market would not be able to keep their plans, even if they liked them.

… most consumers in the individual market will not be able to keep their policies.

Despite what NBC wrote, the plan changes involved didn’t even need to be “significant” as a normal person would understand the word. Changes in deductibles as low as $5-$10 could and did bury many supposedly grandfathered plans.

Middle-income and upper middle-income professionals and self-employed persons comprise much of the individual market. They are now being forced to choose between either purchasing far more expensive coverage through their state exchanges containing coverage they neither want nor need, or doing without health insurance entirely and paying a tax penalty. Additional millions of Americans who have chosen to be uninsured until now are facing the same choices. In California alone, according to the state’s Covered California exchange, this will affect about 2.7 million people who will receive no Obamacare subsidies to cushion the impact: A March outside study commissioned by Covered California estimated that average monthly Silver and Bronze plan premiums for affected individuals across all age groups would be $450 and $386, respectively. That’s supposedly a 20 percent average increase for those who are currently insured, and $386 to $450 the currently uninsured haven’t been spending at all.

People who know they will have to spend hundreds of dollars extra every month on health insurance starting next year won’t wait until next year to sharply curtail their spending. They’ll start the minute they learn the bad news, taking billions away from November and December retail sales. Meanwhile, those who will supposedly be saving money on health care thanks to subsidies won’t change their spending habits until the lower premiums take effect in 2014.

It would only take $4 billion in reduced monthly spending by affected individual plan households each month with a Keynesian multiplier of 1.75 to clip a half-point from the nation’s $1.4 trillion monthly gross domestic product — and most forecasts for fourth quarter GDP were at 2 percent or below even before the ADP report and a recent dive in consumer confidence were known. There is also an undetermined number of people in “small group employer plans” who are seeing their plans terminated, and whose impact will only compound the damage.

Suddenly, thanks to the accumulated effect of years of poor economic policy choices combined with the sticker shock of Obamacare, no GDP growth in the fourth quarter is within the realm of possibility.