African AIDS Defeatable (Thanks to Bush)

Between Bill Clinton and George W. Bush, who has done the better job fighting African AIDS?

In 2002, David Corn at Alternet told us that Clinton had been a bitter disappointment:

Clinton now wonders aloud why the West stood by and did little as the AIDS crisis in Africa exploded. … Why did you and your administration not respond?

Thanks to weak and inaccurate media coverage, those who recall Mr. Bush’s aggressive 2003 State of the Union announcement of PEPFAR (the President’s Emergency Plan for AIDS Relief) can be forgiven for thinking that the money spent, like so much other past foreign aid, has accomplished little.

My first inkling of the truth came from, of all places, the Catholic News Agency on April 3:

The percentage of eastern Zimbabwean men aged 17 to 19 who had engaged in sexual activity dropped from 45 percent to 27 percent, and among women aged 15 to 17 the rate dropped from 21 percent to 9 percent.

While the period cited predates PEPFAR, it’s the reason for the successes in Zimbabwe just cited, as well as Kenya and before that Uganda (not excerpted), which caught my attention (bolds are mine):

“Five years after PEPFAR first began, the efficacy and importance of promoting abstinence and ‘be faithful’ initiatives have been demonstrated. The evidence is compelling.”

PEPFAR … relies on the ABC model, which stands for “Abstain, Be faithful, use Condoms.” … The ABC model “is now recognized as the most effective strategy to prevent HIV in generalized epidemics. … The legislation’s emphasis on ‘AB’ activities has been an important factor in the fundamental and needed shift in USG prevention strategy from a primarily ‘C’ approach prior to PEPFAR to the balanced ABC strategy.”

… No generalized HIV epidemic has ever been rolled back by a prevention strategy primarily based on condoms.

… Serara Selelo-Mogwe, a public health expert and retired nursing professor at the University of Botswana … said (to the Washington Post in March 2007), “If you just say use the condom … we will never see the daylight of the virus leaving us.”

Now I get it: George Bush isn’t getting much praise because he has violated a central tenet of Old Media concerning sexually transmitted diseases: Condoms uber alles. Journalists’ seemingly innate hostility towards anything that might be labeled a faith-based initiative doesn’t help either.

In the credit-minimizing process, the press has grossly exaggerated the amount of money spent on the “A” and “B” parts of “ABC,” and has even minimized or ignored the still-present “C” element.

Here is PEPFAR’s actual spending plan for the fiscal year that will end on September 30: 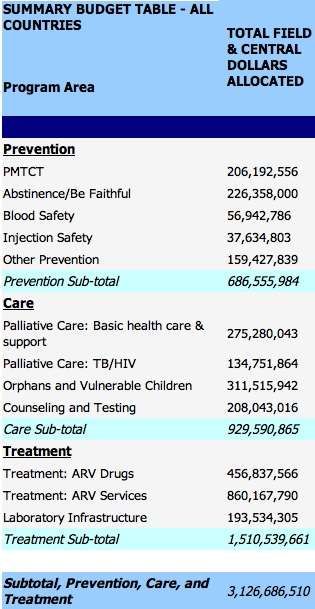 PEPFAR, at the end of its introduction to the 2008 plan, makes the roles played by “A” and “B” very clear:

Of note, Abstinence and Be Faithful (AB) activities account for 7% of the total prevention, care, and treatment budget, 33% of all prevention activities, and 58% of programs that address prevention of sexual transmission of HIV/AIDS.

At an earlier point in that same introduction, PEPFAR shows that the “C” element has not been ignored:

The USG has supplied nearly 1.9 billion condoms worldwide from 2004 through 2007 — as Dr. Peter Piot of UNAIDS has said, more than all other developed countries combined.

The president has seen the amounts dedicated towards “A” and “B” misconstrued by the press as one-third of all spending (instead of 1/3 of only the amount dedicated to prevention), and the degree of program success understated and/or denied. Incredibly, he has even been portrayed as a tightwad.

Here are just two of very many possible examples. According to Jennifer Loven of the Associated Press, Feb. 17:

Democrats want to strip requirements that one-third of the money go to abstinence-until-marriage programs and that some groups sign anti-prostitution pledges.

Some Democrats also say that Bush’s request for $30 billion over the next five years, twice his original commitment of $15 billion, is too little.

“Though PEPFAR has helped increase accessibility to anti-viral drugs, the program is controversial because there is little focus on distributing condoms — a staple of the program under President Clinton — or on sex.”

“The program is ‘largely pursued through faith-based initiatives’ … [and] it’s not clear whether the AIDS-prevalence rates are going down.”

The bottom line is that the war on African AIDS, seen by many as virtually lost at the century’s turn, could be won. If it ultimately is, PEPFAR will have been a significant contributor. Couldn’t the press, just this once, put its biases to the side and tell the world about it?