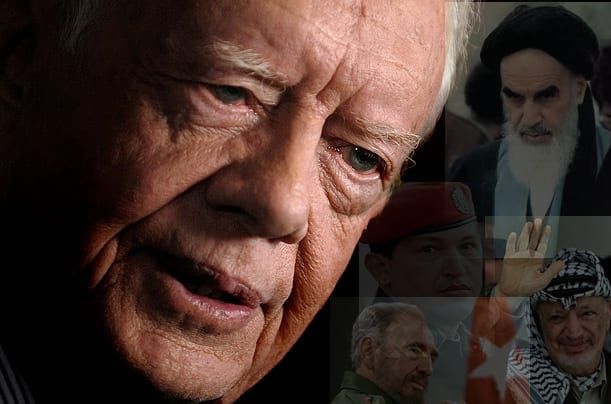 “The United States is abandoning its role as the global champion of human rights.”

Thus begins former President James Earl Carter’s recent New York Times op-ed, in which he claims that the United States, through its use of unmanned aerial vehicles, consistently violates the Universal Declaration of Human Rights. Whether drones are morally acceptable is, of course, a valid area of debate, and one might have principled reasons for opposing them. I propose, however, that we look into Carter’s own history of violating the UDHR.

Unlike Ronald Reagan or both Bushes, who, like Johnny Carson, fully embraced the silence of retirement after leaving office, Carter since 1981 has created another career devoted to loud and useless ramblings on every conceivable issue. In the world of progressive activism, success is measured not by results but by the loudness of one’s emotional allegiance to “causes.” Therefore, in the spirit of empiricism, I propose that we judge Carter by his own standards.

For instance, Article 21 of the UDHR states, in full:

(1) Everyone has the right to take part in the government of his country, directly or through freely chosen representatives.
(2) Everyone has the right of equal access to public service in his country.
(3) The will of the people shall be the basis of the authority of government; this will shall be expressed in periodic and genuine elections which shall be by universal and equal suffrage and shall be held by secret vote or by equivalent free voting procedures.

I hereby accuse ex-President Carter of violating the Universal Declaration of Human Rights. Through his feckless, fraud-enabling Carter Center, he has helped validate some of the most blatant electoral fraud in the developing world, including Hugo Chavez’s sham recall referendum in 2004, which Carter and his ramshackle organization endorsed. The peanut farmer stuck to his story even after Mary O’Grady of the Wall Street Journal skillfully dismantled the Carter Center’s claim to have checked the election results (they looked at tally sheets but weren’t allowed to confirm these against machine-issued ballots given to voters).

The most egregious example of Carter’s “peace” efforts, however, occurred in the former Sudan (now split into two countries, north and south). In 2010, the Carter Center, along with the United Nations Development Program, claimed to be “monitoring” the Sudanese elections, the first multi-party elections to be held in that blood-soaked country for decades. They were a complete farce. The abattoir dictator and genocidaire Omar al-Bashir “won” the “election” with close to 70 percent of the “vote,” which included, as an amateur video has shown, officials of Sudan’s National Elections Commission stuffing ballot boxes. Journalists at the time, including Louise Roland-Gosselin of the Guardian, also alleged that the regime had conducted a spurious census that under-represented Darfur and Southern Sudan, restricting voter registration.

The Carter Center was oblivious to all this. In a Los Angeles Times op-ed dated April 28, 2010, Carter claimed that

we saw the generally orderly polling that we’d hoped for, and voters turned out in good numbers. However, as we expected, notable flaws in the process prevented the election from meeting strict international standards. Still, the elections fulfilled an important required step….

Understand, Carter published this op-ed eight days after the BBC reported the ballot-stuffing story. Carter did have a change of heart about the “generally orderly” character of the elections about a month later, when he decried the vote counting as “chaotic, non-transparent, and vulnerable to electoral manipulation.” Carter’s stark shift in tone was doubtless a face-saving attempt to hide his embarrassment: his organization, which prided itself on having election “monitors” in all provinces of Sudan both before and after the vote, wasn’t even able to detect, much less to ameliorate, the “chaotic” practices that were so obvious to journalists and others.

Despite his pretense of “serving” nations like Sudan, Carter has helped keep these nations in a state of misery and slavery by rubber-stamping the regimes’ fraudulence and violence. Way back in the 1990s, for instance, Carter opposed placing Bashir on the U.S. State Department’s list of state sponsors of terrorism. His reason was that such a move would represent “bias” against Muslims. Carter made no mention of the fact that both al-Qaeda and Carlos the Jackal, who were and are responsible for the murders of Muslims and non-Muslims all over the world, were then guests of Khartoum. It was also apparently not “biased” against Muslims that Bashir, after taking over Sudan in a 1989 coup, embarked on a campaign of torture and murder of dissidents all over the country. This is to say nothing of Carter’s cavorting with Fidel Castro, his praising of fellow “peace” prize-winner Yasser Arafat, who murdered American diplomats in 1973 (in Sudan, of all places), and all the books he has “written” comparing the open society of Israel to apartheid-era Pretoria.

In his op-ed, Carter writes that “our country can no longer speak with moral authority on these critical issues.” I propose that he solemnly extend this vow of silence to himself.

Robert Wargas is a contributor to PJ Media. A native of Long Island, he was educated at the City University of New York and Yale University, and has also written for The Daily Telegraph of London and The Weekly Standard. Outside of opinion writing, he has worked as a professional historian for a major research laboratory and university, documenting the history of biotechnology since the 1970s. He has also reported for both weekly and daily newspapers, including Newsday. He maintains a personal blog/website at robertwargas.org. Follow him on Twitter @RobertWargas
Read more by Robert Wargas