It makes for a great headline, and has been splashed across the British and much of the European press.  The full story, as always, is considerably more complicated.

Yes, Lauren Booth, the 41-year-old journalist /activist arrived three weeks ago by boat, as part of the Free Gaza expedition that sailed from Cyprus (click here for PJM’s coverage). Most of the 44-member group elected to leave the same way they arrived. Ms. Booth decided, along with 10 others, to stay behind.

So far, neither Israel nor Egypt has allowed any of the 10 activists who remained in Gaza to leave. Ms. Booth, however, is the only one of the group whose predicament has been widely covered by the foreign media. She is also the only one whose half-sister Cherie is married to a former prime minister of Great Britain.

Nearly every article about Ms. Booth’s predicament leads with the fact that she is Blair’s sister-in-law. Most mention that the former prime minister is now a Middle East envoy. Almost none mentions that the two are not on speaking terms.

As Ms. Booth put it in a 2006 speech at a rally to protest the Iraq war: “By chance of marriage, I am related to Tony Blair — a fact that makes neither of us happy today, I can tell you that.” Ms. Booth does not seem at all unhappy, though, with the generous publicity she has won for her Gaza adventure, by virtue of her family connections. Mr. Blair’s staff said he would not involve himself in the matter, which is being dealt with by the British consulate in East Jerusalem.

Interviewed last week for Ynet by Noa Raz, Ms. Booth insisted that the conditions in Gaza were worse than those in Darfur, where an estimated 400,000 have been killed since 2003. She also compared Gaza to a concentration camp. “You were in the concentration camps,” she told the 20-something reporter, who was born in Israel two generations after the Nazi Holocaust. “And I can’t believe that you are allowing the creation of such a camp yourselves.”

A few days before the Ynet interview was published, Ms. Booth was photographed by an AFP photographer while purchasing Snickers bars and bottled soft drinks at an apparently well-stocked Gaza supermarket. 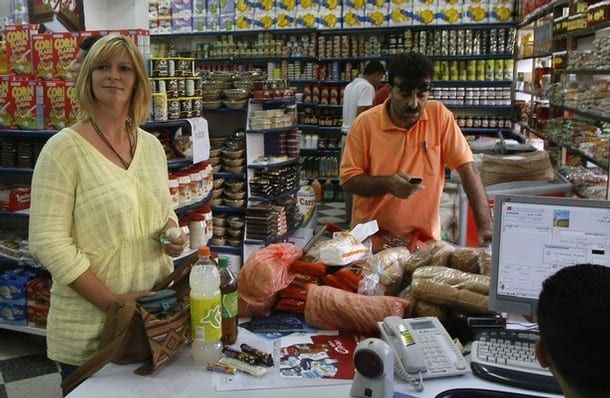 In an interview with PJM, Ms. Booth says she has tried three times to leave Gaza — once via Erez Checkpoint, which leads into Israel, and twice via the Rafah border crossing into Egypt. She was turned away by both the Israelis and the Egyptians, but told me she holds Israel solely responsible for her predicament. I pointed out that both a senior IDF spokesman and several well-informed Palestinian journalists confirmed that Israel has “zero control” over who crosses the Rafah border. In other words, perhaps Egypt was at least as responsible as Israel for forcing her to remain in Gaza. This elicited an angrily dismissive response from Ms. Booth, who claimed that “high up sources told her” that Israel is pressuring Egypt into keeping her trapped in Gaza.  She would not reveal the source of her information, nor did she explain how it would serve Israel to have her stay indefinitely in Gaza.

The Egyptians have controlled the Rafah border, keeping it mostly sealed, since Hamas took power in June 2007, following a bloody civil war with rival Fatah. EUBAM-Rafah (European Union Border Assistance Mission) pulled its multi-national monitoring staff out of Gaza immediately after Fatah was routed, in accordance with the EU’s policy of no contact with Hamas.  A skeleton staff of 18 remains “on standby” in the Israeli town of Ashkelon.  Spokeswoman Maria Telleria said that the EU is “not involved in Rafah border decision in any way right now.”  According to Ms. Telleria, the Egyptians have opened the border crossing 60 times since June 2007. Most recently, Egypt’s President Mubarak ordered the border open over the two days preceding Ramadan, which is when Ms. Booth tried to cross and was turned back. “They [the Egyptian border officials] told me, ‘You are one of the people who came on the boats. We have received a call about you,'” recounted Ms. Booth.

Israel imposed a blockade on Gaza following the Hamas takeover, allowing only basic supplies and humanitarian aid to enter. Very few Palestinians are permitted to enter or leave the territory. Egypt brokered a truce between Israel and Hamas, but the occasional Qassam still lands in the Sderot area and Israel maintains its blockade as a means of pressuring Hamas to release Gilad Shalit, an IDF corporal who was abducted from Israeli territory in June 2006.

As a result of the blockade, Gaza suffers from a variety of shortages — especially fuel. Some of the shortfall is made up by smuggling via tunnels dug under the Rafah border, but friends in Gaza report many shortages of basic things like chalk for classrooms. Goods, of course, cannot compensate for the psychological burden of feeling trapped indefinitely in a rather small strip of land. That is why Egypt opens the Rafah border every so often —  as a release of psychological pressure on ordinary Gazans. Senior Hamas officials are, according to several sources, allowed to enter and leave the territory via Rafah at will.

I am an Israeli who opposes the blockade of Gaza. I do not believe in collective punishment, and I do not see any evidence that the blockade is either loosening Hamas’s grip on power or expediting the release of Gilad Shalit.

When I spoke with Jeff Halper, the only Israeli Jew with the Free Gaza group, I respected his position: he did not meet with Hamas leaders, as Lauren Booth did (even accepting a Palestinian passport from Ismail Haniyeh) nor did he make any dramatic or self-aggrandizing statements to the media. He said he wanted to force the Israeli government to acknowledge that its control of Gaza’s borders and territorial waters is a form of occupation, even in the absence of an actual Israeli presence in the territory, and that if Israel does control Gaza’s borders then it also has a responsibility to its residents. Halper did not try to mitigate the terrorizing effect of the Qassams launched on Israeli civilian population centers from Gaza. He did not even complain about having been held overnight in jail after he entered Israel through Erez (Israelis are forbidden by law from entering Gaza).

I may not agree with all Jeff’s positions, but I respect him.

I cannot say the same for Lauren Booth. I was completely prepared to speak with a sympathetic woman who was interested in having a real conversation, but this was not to be. Almost as soon as I identified myself as a reporter from Tel Aviv, she launched into a tirade that was characterized by a mixture of hectoring, self-righteousness, drama, and the occasional falsehood.

Referring to the interview she gave to Noa Raz, I asked if she had compared Gaza to the Nazi concentration camps. “Yes I did,” answered Ms. Booth. And do you really think the situation in Gaza is comparable to that in Darfur, where 400,000 people have been killed over the past five years? “Well,” she said, “Do we want to wait until 400,000 Gazans are dead?” She added that she had visited a camp in Gaza where 16,000 families had malnourished children, and the rate of unemployment hovered around 90 percent.  If accurate, these are shocking figures that should concern all Israelis. But does Ms. Booth really expect to arouse our sympathy by making the grossly inappropriate suggestion that Israel is committing genocide in Gaza?

“Do you think that Gaza receives less media attention than Darfur?” I asked. “Absolutely!” the British activist answered vehemently. So I did a search on Google news for “Darfur,” where 400,000 people have been killed over the past five years, and received 13,912 results. A search for “Gaza,” where, according to B’tselem, 810 Palestinians were killed in 2006-2007, brought up 17,605 results.

Asked how long she thought she would be stuck in Gaza, Ms. Booth answered tartly, “As long as the Israelis decide I should be here.” Then she added in a passionate tone, “I must see my children! They are 5 and 7 and they are waiting for me in France!” She did not explain why, if she was so concerned about her children, she elected to stay illegally in Gaza when she had the option of leaving on the same boat that brought her there.

But what irritated me the most about Ms. Booth’s long tirade was her description of what happened at Erez Checkpoint, which leads into Israel. I crossed Erez several times before it was closed to Israelis, and remember it vividly.

According to Ms. Booth, she arrived at the checkpoint without a permit to cross, which means that the Palestinians, who coordinate via phone with the Israeli border police on the other side of Erez, would have prevented her from continuing. Ms. Booth: “I tried to coordinate with the Israelis two days in advance, via the British Council, but that didn’t work. So I went with an old lady who did have a permit to cross, although she had been turned back several times.”

Ms. Booth said she was prevented by Israeli soldiers, who threatened to shoot her. “There were Israeli soldiers on the Gazan side of Erez?” I asked. Hearing the incredulity in my tone, she answered with irritated impatience, “Oh, I don’t know what they were. They were uniformed men with guns, alright?”

“Okay, I said.” “They were Palestinian men guarding the checkpoint. So, did they stop you?”

“Oh no!” she answered. “The Palestinians advised me not to cross, but I walked right into the tunnel and started walking. I was nearly at the Israeli side when a Palestinian man came running up behind me, holding a mobile phone and shouting that the Israelis had told him they would shoot me if I took another step.”

Perhaps the Palestinian border guard really did call his Israeli counterpart to tell him that Ms. Booth was trying to cross into Israel against their orders, and to ask him what the Israelis would do to her if she continued. And perhaps the Israeli border guard really did tell his Palestinian counterpart that he would shoot Ms. Booth if she continued another step. But I really doubt the incident occurred as Ms. Booth recounts it. Here’s why:

The entrance to Israel via Erez is practically impenetrable. It is a maze of turnstiles that lock automatically, bulletproof glass, closed circuit cameras and disembodied voices that issue instructions via the public address system. One does not see an Israeli soldier until one has passed through security, which is remotely controlled. During the June 2007 civil war, dozens of Fatah members took shelter from Hamas fighters in the Erez “sleeve.” But none tried to make a dash for Israel, because it is simply not possible  — physically — to just push through.

In a phone interview, IDF spokesman Yigal Palmor said, “Ms. Booth is determined to provoke Israel into a confrontation. She put herself in this position [of being stuck in Gaza]. According to international law, you cannot just show up at a border and demand entrance to a country. The Israeli authorities are considering the request of the British consulate to allow her to exit Gaza through Erez. The matter is still under consideration.”

Palmor continued, “By the way, what has Lauren Booth done for peace since her arrival in Gaza? Has she done anything practical and concrete to help the Palestinians? Has she demonstrated for peace? Has she tried to work for the release of Gilad Shalit?”

The official response from the Egyptian embassy in Tel Aviv regarding Ms. Booth’s predicament? “We have no comment.”

Ms. Booth’s final words to me were, “I hope you will report this story in a fair manner.”

Lisa Goldman is a freelance Canadian-Israeli journalist, who blogs at On the Face. She lives in Tel Aviv.
Read more by Lisa Goldman
SHOW COMMENTS