Oh, That War on Cops

Writing in the Washington Post thirteen months ago, Radley Balko assured his readers that, contrary to widespread belief, there was no “war on cops.” He cited a Rasmussen poll taken the week before that found 58 percent of respondents believed there was indeed such a war while just 27 percent did not. Public opinion was at odds with the truth, Balko wrote, and he had the data to support his position: FBI statistics showed that officer deaths from gunfire and non-fatal assaults on police had been declining for years.  Balko wrote that 2015 was “shaping up to be the second safest year for police ever, after 2013.”

It’s good to be reminded when the actual statistics run counter to public perception. Police work is after all concerned with seeking the truth, and law enforcement is not served when hysteria is fomented by misleading information. That said, what would Balko say about this year? Has the war whose existence he denied last year now begun?

According to the Officer Down Memorial Page, 46 police officers have been shot to death in the United States so far this year, a staggering 55 percent increase over the number seen at this time in 2015. Balko would perhaps argue that this is an aberration, a statistical blip on an otherwise downward trend, like a brief rally in a long-term bear market. And maybe it is, but whatever the multi-year trend may be, a 55 percent increase surely bears examination. Even the skeptics of the “war on cops” must admit that there has been a change in attitudes regarding crime and policing over the last several years, a change that became all the more pronounced with the police shooting of Michael Brown in Ferguson, Missouri, in August 2014. Lest we forget, the officer who shot Brown was acting completely within the law when he did so. Despite this, the Brown shooting brought the Black Lives Matter movement to prominence, and despite its origins in the poisonous lie of “hands up, don’t shoot,” it continues to shape both perceptions and policy in American policing.

As proof of this, witness how farcical have become the meetings of the Los Angeles Police Commission, where the same small group of BLM activists appear every Tuesday morning to harangue the panel, often in the coarsest of terms, this despite the obvious ideological sympathy the commissioners have for the protesters. It was this same police commission, after all, that found an officer had acted “out of policy” when he shot a woman who aggressively advanced on him while brandishing a knife. Reflecting the commission’s emphasis on “de-escalation,” the panel ruled that the officer should have “re-deployed,” a euphemism for their insistence that he should have run away.

The same blinkered mindset has also taken root in Chicago, where policy changes on police use of force are, according to the Chicago Tribune, “aimed at reducing controversies.” Chicago’s politicians and the Police Department’s command staff are understandably eager to avoid “controversies” that might undermine their comfortable positions, but what price will the city’s cop’s pay for this eagerness? We already have an answer to that question in the form of an officer who was badly injured by a man under the influence of PCP. The officer decided not to use her gun to defend herself, she told Superintendent Eddie Johnson, because the feared a public backlash if she did. On Oct. 5, two officers were flagged down and alerted to a traffic accident that had just occurred on the city’s West Side. The officers stopped to investigate and found that a car had crashed into the front doors of a liquor store. The driver of the car was walking away and ignored the officers’ commands to stop. And here the officers had a decision to make: They could let the man walk away, impound the car, and take a hit-and-run report, thereby avoiding even minimal risk of “controversy,” or they could do their duty and stop him, the better to find out how he had come to drive his car into the liquor store.

Woman Calls Police After Police Pulled Her Over

Being conscientious and diligent cops, they chose the second option, bringing themselves into contact with one Mr. Parta Huff of Maywood, Illinois. Unknown to the officers was the fact that earlier on that same day, Huff had appeared in court to answer to a charge that he assaulted a police officer in nearby Forest Park last April.  In that incident, an officer saw Huff run a stop sign and attempted to pull him over. Huff drove off but crashed the car and tried to run away. The officer was injured in the altercation that followed.

But again, the Chicago officers were unaware of this history when they tried to contact Huff. And they were also unaware (though it would soon become apparent) that Huff was under the influence of PCP. In the ensuing struggle, three officers were hurt, with the female officer described above suffering a concussion, among other injuries. A firefighter who responded to treat the officer was captured on a police body camera saying, “A couple months ago, you could have shot him,”

The firefighter’s time frame might have been understated by a year or two, but the point remains. Had that officer shot Huff so as to prevent him from bashing her head into the pavement, the headlines would have read, “Cop shoots unarmed black man,” and the drill would have played out in familiar fashion, with protesters shutting down Michigan Avenue and politicians scrambling to avoid “controversy” by disavowing the officer’s act of self-defense. While the laws governing police use of force has gone all but unchanged since the Supreme Court’s Graham v. Connor decision in 1989, much else is different, thanks in no small part to the continuing fraud perpetrated by the Black Lives Matter movement and its fawning sympathizers in the media and its cowardly servants in government.

And if it weren’t bad enough that BLM’s lies have so influenced people outside law enforcement, we now see their effect on people who presumably should know better. On Monday, at the San Diego meeting of the International Association of Police Chiefs, the group’s president, Chief Terrence Cunningham, of the Wellesley, Mass., Police Department, issued an apology “for the actions of the past and the role that our profession has played in society’s historical mistreatment of communities of color.” Putting aside the noxious concept of inherited guilt, in delivering his apology, Cunningham illustrated the divide between so-called police executives and the rank-and-file officers they purport to lead. 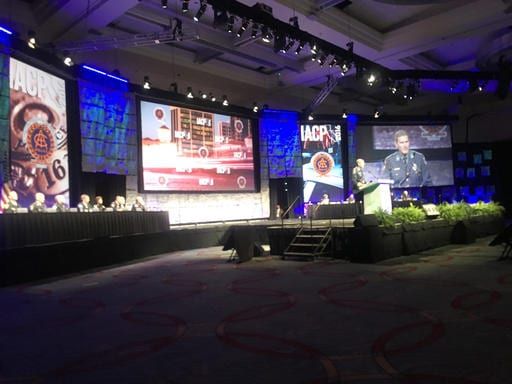 The president of one of the largest police organizations in the United States on Monday, OCT. 17, 2016, apologized for historical mistreatment of minorities, calling it a “dark side of our shared history” that must be acknowledged and overcome. Terrence Cunningham, president of the International Association of Chiefs of Police, said at the group’s annual conference that police have historically been a face of oppression, enforcing laws that ensured legalized discrimination and denial of basic rights. He was not more specific. (AP Photo and caption/Elliot Spagat)

People rise in their respective police departments to the extent they can (or convincingly pretend to) adopt the political views that dominate their local governments, and Chief Cunningham would seem a perfect fit for Wellesley, a prosperous suburb of Boston. A few facts about the town: The black population is 2 percent; the median income in 2014 was $159,615; 82.2 percent of residents over age 25 have at least a bachelor’s degree and 48.5 percent have graduate degrees; and in 2012 the town voted 56 to 41 percent for Obama over Romney. When it comes to crime, the town hasn’t seen a murder in at least 14 years and averages only a handful of robberies and assaults annually. While Chief Cunningham may speak eloquently for his placid little town, he would seem an inapt choice to address issues related to the increasing crime seen in so many of America’s cities.

Although Chief Cunningham made an effort to seem evenhanded by speaking of the thousands of police officers who over the years have sacrificed their lives while doing their duty, he neglected to mention the eight who had been murdered just in the previous two months. (Another was murdered on Wednesday, the fourth killed in California in the last two weeks.) And, since Cunningham is so concerned with policing and its effects on “communities of color,” he might have added some context to his apology by noting that of the 543 cop-killers identified since 2006, 222 of them, or 41 percent, have been black.

We of course will never know if any of the police officers murdered in the last two years died because they hesitated to defend themselves out of fear of controversy. But we now have the word of one Chicago cop who is candid enough to admit she did not shoot a man when she had every legal and moral right to do so. She speaks for lots of cops, not just in Chicago, but all across the country. Surely she will be more circumspect the next time she confronts some uncooperative suspect.

The war on cops is real, but the losers in this war are not the cops themselves, but rather the law-abiding citizens who must live in the areas most affected by crime and most in need of effective policing. When the police fear controversy, the criminals don’t fear the police.