How did the Charlie Hebdo Terrorists Plan Their Rampage? 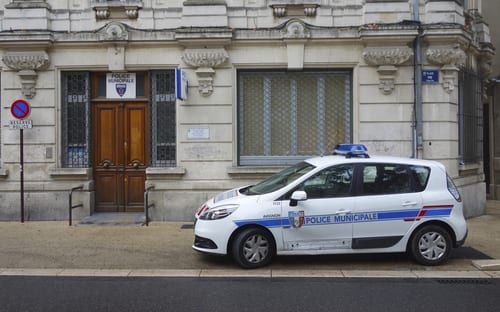 Stop in the name of the law! Or the distinct lack thereof. (Photo: Leonard Zhukovsky / Shutterstock.com.)

So this time it was Paris.  Where next?

As relieved as we might be at the tracking down and killing of the Paris jihadists, the relief is short-lived.  Yes, three of them are dead, but how many others might there be out there?  In 2013, the Pew Research Center published a report on polling conducted in Muslim countries.  “Muslim Publics Share Concerns about Extremist Groups,” read Pew’s headline, an apparent effort to portray a level of moderation among Muslims that is belied in the report itself.  We are supposed to draw comfort from the news that 67 percent of respondents said they were concerned about Islamic extremism in their own countries, while 27 percent said they were unconcerned.  And while we can only speculate on what it might take to raise concern among that 27 percent, what are we to make of the fact that only 57 percent of respondents reported having an unfavorable view of Al Qaeda?  Or that 62 percent of residents in the Palestinian territories said that suicide bombings can often or sometimes be justified?

And by now it’s well established that very little in the way of provocation is required to spur some Muslims to mass murder.  Cherif and Said Kouachi, the brothers who committed the Charlie Hebdo massacre, were motivated by cartoons, of all things.  It is just as well established that Western elites are in blithe denial about the scope of the problem, an attitude illustrated, to cite just one glorious example, in a recent Nicholas Kristof column in the New York Times.  “Small numbers of terrorists make headlines,” he writes, “but they aren’t representative of a complex and diverse religion of 1.6 billion adherents.”

True enough, Mr. Kristof, but if only 1 percent of those 1.6 billion Muslims harbor an inclination toward violent jihad, that puts Western civilization up against a force of 16 million people.  Given the havoc caused by only three of them in Paris last week, or by two of them in Boston in 2013, or by ten of them in Mumbai in 2008, or by 19 of them on September 11, 2001, to cite only four on a very long list of examples, how many headlines are you willing to see written about Muslim atrocities before you concede there is a problem festering within Islam itself?

So, while Mr. Kristof and his kind worry about an always feared but never manifested anti-Muslim backlash, the more sober-minded are set to the task of preventing attacks and preparing for an effective response should one occur.  Which brings us to the Charlie Hebdo attack and the lessons that might be drawn from it.

As I watched on television as the events unfolded in Paris, I tried to orient myself to the killers’ movements both before and after the assault in the Charlie Hebdo offices.  How did the killers arrive at the location?  How many were there?  How were they armed?  How had they been trained?  How did they plan their getaway?  Did they have additional targets?  I tried to imagine myself on those Paris streets and responding to the report of gunfire.  Where would I go first?  What kind of cover would be available?  Had bombs been placed nearby to kill the mass of first responders that would soon collect at the scene of the crime? 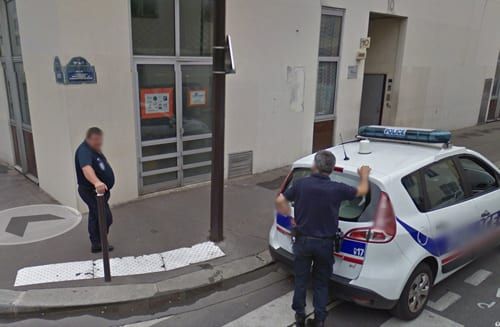 In conducting this mental exercise I used Google Earth to familiarize myself with the area, first getting an aerial view of the neighborhood before zooming in to street view for a look at the exterior of the building that housed Charlie Hebdo.  And when I saw that street view I saw something that explained a great deal about what had occurred.

In 2011, Charlie Hebdo published an issue in which Mohammed was said to be the guest editor.  This was followed, one day later, by the firebombing of the magazine’s office, presumably by adherents of the Religion of Peace offended at some of the editorial decisions (disagreements about comma placement, I suppose).  Since that time, the office has been guarded by police officers, two of whom are visible in the images captured by the Google-mobile in August 2014 as it drove down Rue Nicolas Appert and Allee Verte, at the corner of which streets the Charlie Hebdo offices are located.  In the pictures, the officers are standing next to a parked police car of the same type we saw riddled with bullets last week.  Both officers are armed with pistols, but there is no sign of any rifles, shotguns, or other hardware so often decried these days as evidence of an overly “militarized” police force.

We should assume that the brothers Kouachi conducted reconnaissance on their target prior to the attack, and that the casual police posture as depicted in the Google images was in evidence when they did so.  So take note: the presence of two armed police officers was insufficient to deter the killers from embarking on their mission.  They saw the target as lightly defended, as it tragically turned out to be.

But now the questions: We know that two officers were killed in the attack, one inside the building, the other shot in the head after falling wounded to the sidewalk a block away.  Were there other officers posted in front of the building at the time of the attack?  If officers were supposed to be there but were not, why weren’t they?  And if they were there, what did they do?  How is it that the killers were able to arrive at the location and alight from a car dressed and equipped as they were without being seen and engaged with by the officers assigned to guard the place?

I can attest that there is no more boring of an assignment in police work than being stuck at a fixed post for eight or ten straight hours.  It is difficult to maintain a high level of vigilance for a sustained period, which is why officers in such assignments should be rotated frequently and given opportunities to rest.  And they should be armed appropriately to meet the anticipated threat regardless of giving offense to those who get the vapors at the sight of guns.

The war goes on.  The next attack is coming.  Will we be ready for it?