The Auto Industry Tries to Cheer Up

So far this year, the major automotive shows have felt a lot like a gathering of pallbearers. If not for bad news from the automakers, there wouldn’t any news at all. But the Geneva show is a lot like baseball’s spring training; it has always been the launch pad for exciting new concepts that look into the future. That’s not to suggest that the dark cloud of recession didn’t find its way into Geneva’s Palexpo convention center. Before nearly every new car was unveiled, an executive took the stand to talk about how glum sales were, some seeing the light at the end of the tunnel as an oncoming train. So much for the rosy predictions of the past, where if you added up all the sales projections, the result was often higher than the total vehicle output. When the silky covers were snatched off this year, many of the vehicles they revealed were exciting and might head for production. But a few were startling in another way, and hidden from public view might be the best outcome. We even had one from each category from the same vaunted automaker.

Aston Martin took the wraps off three new models: a production Vantage with the big V-12 engine from the more costly DB series; a stunning One-77 for the few (seventy-seven) aristocrat collectors that still possess $1.75-million; and a resurrection of the Lagonda nameplate attached to a big, tall SUV that takes a Parisian runway fashion risk. The look was so unusual, a car magazine editor was compelled to complain about the Lagonda look on his blog. 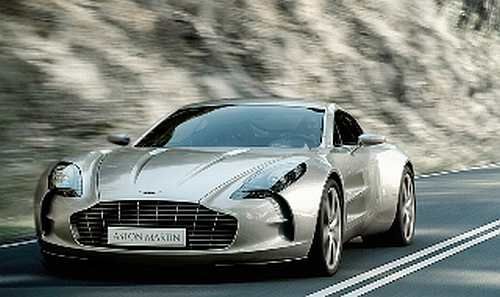 If your ship is coming in soon, Aston Martin’s One-77 may be just the car for you.

BMW revealed another five-door coupe model, a 5-Series Gran Turismo that’s a bit lower and sedan-like than the newly launched X6 sportwagon, while Mercedes-Benz introduced a real coupe, one with two doors as part of its new E-Class family. The svelte new offering looks much more expensive than the CLK line that it replaces. 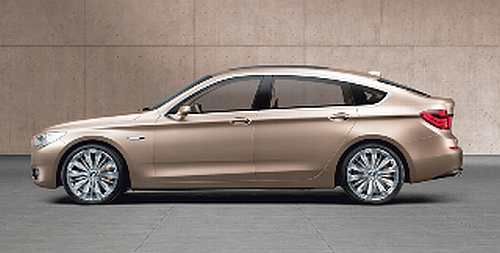 Apparently, BMW wants to know how many four-door coupes the market can take.

From the “whatever happened to the time” department, Infiniti celebrated its 20th Anniversary with the Essence, a terrific coupe concept that combines GT-R snarl with electricity to create a 592-horsepower hybrid. Since Al Gore is in such a hurry to save the planet, this might be just the car for the former VP. If we had a ‘small with style’ award, it would go to Ford for its Iosis Max, a five-passenger, five-door that may be the future Focus. The rear sliding doors are brilliant and beg the question; “Why didn’t someone think of that before?” On the other end of the pecking order, the new Rolls Royce 200EX brings the size and price of ultra-elegant motoring closer to the top five-percent of the population. That is until they get their 2010 tax bill… 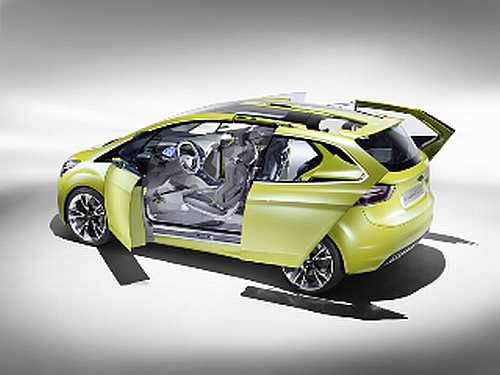 On the bad-news-good-news front, GM’s European chief talked about the company’s fragile future, then took the wraps off the Opel Ampera, a cool rendition of the Chevy Volt’s extended range, electric concept. Chevy’s bowtie brand was represented by Spark, a terminally cute micro compact that might play as well over here if the General can stay afloat through the downturn. Even the Beltway pundits will like its frugal drinking habits. 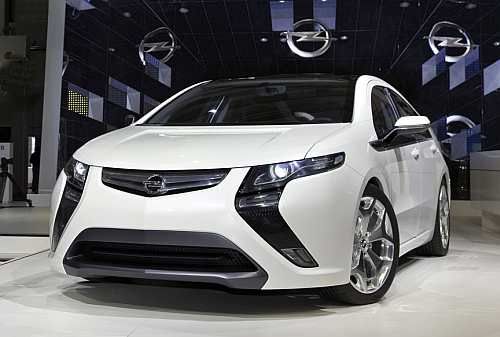 Opel’s version of GM’s Volt looks like an exotic electric.

California’s governor and car enthusiast Arnold Schwarzenegger has apparently solved the state’s fiscal problems along with lobbying for draconian emission standards. So he headed to the Geneva show, hopefully on his own dime, to check out the offerings. The governator was interested in some of the powerful, sexy sports offerings- just the vehicles that we’re unlikely to see after California and the Feds finish making their new rules. 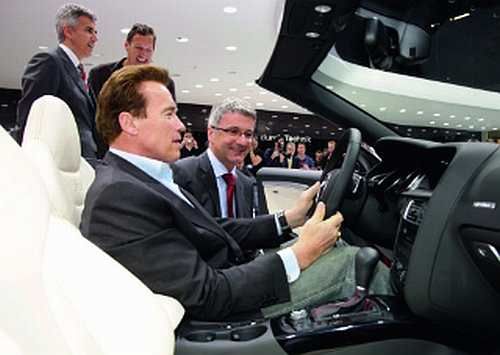 Arnold thrills an Audi executive by just sitting in one of his cars.

Brian Douglas has driven everything with wheels during his career in the automotive technical, marketing, and journalism professions. He is currently a contributing expert for KGO Radio, WHEELS editor for the San Francisco, Washington, DC, and Baltimore Examiner newspapers, automotive features writer for the Minneapolis/St. Paul Times Tribune, and automotive editor for Gentry and Ranch & Coast magazines.
Read more by Brian Douglas